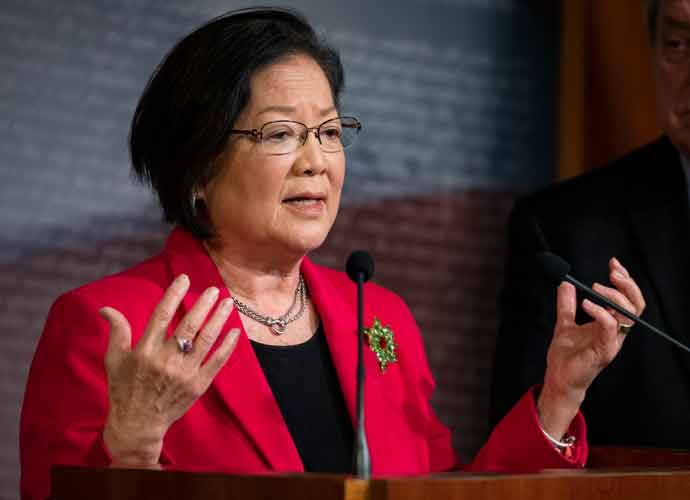 WASHINGTON, DC - JANUARY 30: Senator Mazie Hirono (D-HI) speaks during a press conference with Senate Minority Leader Chuck Schumer (D-NY (not pictured) and Senator Dick Durbin (D-IL) (right) before the Senate impeachment trial of President Donald Trump starts for the day on January 30, 2020 in Washington, DC. The trial will enter into the second day of the question phase where Senators have the opportunity to submit written questions to the House managers and President Trump's defense team. (Photo by Samuel Corum/Getty Images)

Congressional Democrats, led by Sen. Mazie Hirono (D-Hawaii) and Rep. Grace Meng (D-New York), are hoping to pass a bill that will address the surge in hate crimes against Asian Americans, by assigning a Justice Department official to review such incidents, create an online database to track crime rates and require the mitigation of “racially discriminatory language in describing” the pandemic.

The bill proposal has faced resistance from GOP senators. Sen. John Cornyn (R-Texas) said on Monday that the bill is “just a messaging vote.” In addition, Sen. Chuck Grassley (R-Iowa) said that he believes the Senate should wait until Attorney General Merrick Garland has completed his study on hate crimes before passing any legislation. Both senators admitted that they have yet to take a close look at Hirono’s proposal.

“We just want to get more information about who’s reaching out – data collection – working with the state and county law enforcement on hate crimes,” Hirono said. “You would think that all the Republicans would condemn the hate crimes that are being targeted against AAPIs but not enough of them have spoken up.”

When asked about Republican criticism of the bill, Hirono replied: “Coming from the Republicans, just shut up.”

After the shootings of six Asian women in Atlanta last month and a slew of other anti-Asian hate crimes, Hirono and Sen. Tammy Duckworth (D-Illinois) sprung into action becoming vocal critics of the Biden administration‘s lack of Asian American and Pacific Islander representation. Both Hirono and Duckworth threatened to vote against Biden’s non-POC nominees in March. However, their concerns were quieted by the White House’s appointment of a senior Asian American and Pacific Islander liaison.

So far, Biden has only nominated two Asian Americans to Cabinet-level positions (there are 23 total spots that would require Senate approval): Katherine Tai for trade representative and Neera Tanden for Office of Management and Budget director. Of the two, only Tai’s nomination succeeded.