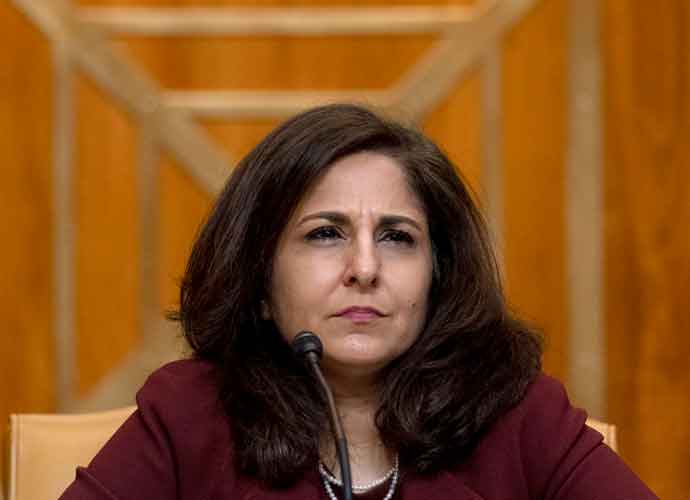 WASHINGTON, DC - FEBRUARY 10: Neera Tanden, President Joe Bidens nominee for Director of the Office of Management and Budget (OMB), appears before a Senate Committee on the Budget hearing on Capitol Hill on February 10, 2021 in Washington, DC. Tanden helped found the Center for American Progress, a policy research and advocacy organization and has held senior advisory positions in Democratic politics since the Clinton administration. (Photo by Andrew Harnik-Pool/Getty Images)

On Tuesday night, Neera Tanden sent a letter to the White House formally asking it to rescinding her nomination as Office of Management and Budget director.

In her letter addressed to President Joe Biden, Tanden wrote, “it now seems clear that there is no path forward to gain confirmation, and I do not want continued consideration of my nomination to be a distraction from your other priorities.”

Tanden’s nomination became unlikely once Sen. Joe Manchin (D-West Virginia) said he would not vote in favor of her. With Manchin out, Democrats needed to find a Republican willing to support Tanden’s nomination, which they did not. Tanden’s outspoken social media history drew the ire of Republicans with Sen. Susan Collins (R-Maine) specifically saying Tanden’s “past actions have demonstrated exactly the kind of animosity that President Biden has pledged to transcend,” in a hearing on Tanden’s nomination in February.

Biden soon after responded to Tanden’s letter in a statement reading, “I have accepted Neera Tanden’s request to withdraw her name from nomination for director of the Office of Management and Budget,” Biden wrote. “I have the utmost respect for her record of accomplishment, her experience and her counsel, and I look forward to having her serve in a role in my administration. She will bring valuable perspective and insight to our work.”