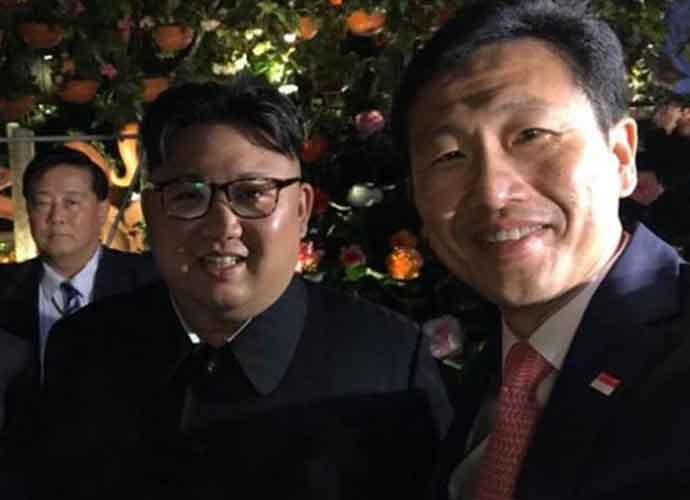 Singapore’s Foreign Minister Vivian Balakrishan took a selfie with the smiling North Korean Leader Kim Jong-un, dressed in his usual striped suit and flanked by dozens of North Korean securities on the eve of his summit with President Donald Trump. The photo is believed to be the first-known selfie that Kim has posed for. Balakrishan, who tweeted the selfie, walked with Kim along the harbor for a sightseeing tour through the central business district of Singapore.

The third man in the photo is Singaporean Education Minister Ong Ye Kung, who shot and shared a second selfie of his own with Kim on his Facebook page.

Guess where? Honored to be able to show Singapore to our special guest.

Last week, Balakrishnan visited North Korea at the invitation of Foreign Minister Ri Hong Yo. He told reporters the visit went well and described the capital city of Pyongyang as “clean, modern, and beautiful with clear evidence of ongoing construction around the city. There are many high-rise buildings and modern designs.”

Kim was staying in the St. Regis hotel accompanied by his sister Kim Yo Jong and Ri Yong Ho. After the tour Kim went to enjoy views over the city from the top of the Marina Bay Sands Hotel and casino. The location also has a darker resonance. The North Korean leader’s half-brother, Kim Jong Nam, was known to frequent a Japanese restaurant at Marina Bay Sands, a former colleague told the Wall Street Journal. The brother was assassinated in Malaysia last year, a killing widely believed to be ordered by Kim.

The trip to Singapore — almost 3,000 miles to Pyongyang — is Kim’s farthest away from home and was just his fourth trip outside his country since taking power in 2011. Earlier this year he made his first foreign visit taking a train to Beijing to meet with China’s leader Xi Jinping.