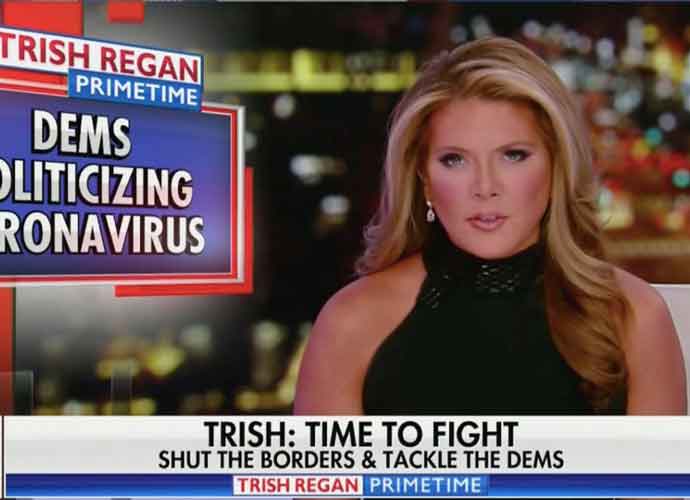 Fox Business host Trish Regan has been removed from her prime-time show for claiming the coronavirus was nothing but “another attempt to impeach the president.”

Her program Trish Regan Primetime is “on hiatus until further notice” according to a statement from Fox Business. It is unclear if she will continue to appear on other Fox Business programs. Executives said this week that the show is “unlikely to return to the lineup.”

The decision was made as a response to “the demands of the evolving pandemic crisis coverage.” Fox said they would instead focus their resources on general-interest programs.

In front of a “Coronavirus Impeachment Scam” graphic, Regan accused Democratic critics of creating “mass hysteria to encourage a market sell-off” and creating fear “to demonize and destroy the president.”

As her monologue was airing, Tucker Carlson’s program on Fox News was also airing. He told his audience, “People you know will get sick; some may die,” and urged politicians to take a more urgent response to the pandemic.

According to a person with knowledge of the conversation, Carlson paid President Donald Trump a visit to urge him to take the coronavirus threat more seriously.

Fox News chief executive Suzanne Scott and Network President Jay Wallace said in a memo that employees would be asked to work from home and to expect programming changes “in the coming days” to cater to a peak in audience interest in the pandemic. “Please keep in mind that viewers rely on us to stay informed during a crisis of this magnitude,” they wrote. “We are providing an important public service to our audience by functioning as a resource for all Americans.”