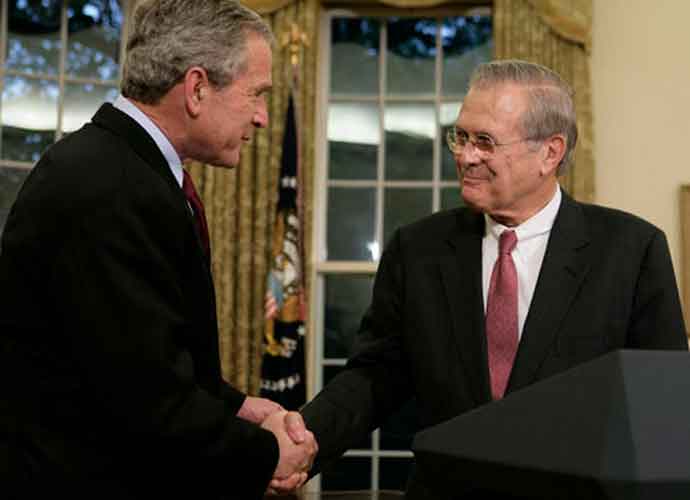 Former Secretary of Defense Donald Rumsfeld died Tuesday at the age of 88. @mitchellreports on his life and complicated legacy. pic.twitter.com/VWgJKYwQtz

Keith Urbahn, a spokesman for the family, said in a statement on Wednesday that Rumsfeld suffered from multiple myeloma. He passed away as his family surrounded him at his home in Taos, New Mexico.

When the news broke, those who worked closely with Rumsfeld spoke out.

Bush described Rumsfeld as a man of “steady service as a wartime secretary of defense – a duty he carried out with strength, skill and honor.”

He served as defense secretary, one of his most notable titles, during especially challenging times in America’s international relations – first during the height of the Cold War with the Soviet Union and the second time after the September 11, 2001 attacks.

Many critics have said that he was responsible for America’s weakening reputation internationally. It was during his second term as secretary of defense that hijackers attacked the World Trade Center in New York and the Pentagon. He oversaw the U.S. invasion of Afghanistan to overthrow the Taliban regime, and he vocally supported the U.S. invasion of Iraq. The invasion was based on the false premise that the Iraqi leader, Saddam Hussein, harbored weapons of mass destruction, which Rumsfeld loudly advanced. The Iraq conflict cost America $700 billion and 4,400 American lives.

He offered his resignation to Bush when he heard in 2004 that some U.S. troops had abused Iraqi detainees in Iraq’s Abu Ghraib prison. Bush refused to accept his resignation.

But in 2006, Bush fired Rumsefel as U.S. casualties mounted, and Robert Gates replaced Rumsfeld as defense secretary. Rumsfeld was defiant about the war for many years, including in the accounts he delineated in his memoir, Known and Unknown (2012).

Rumself is survived by three children, seven grandchildren, and his wife, Joyce.