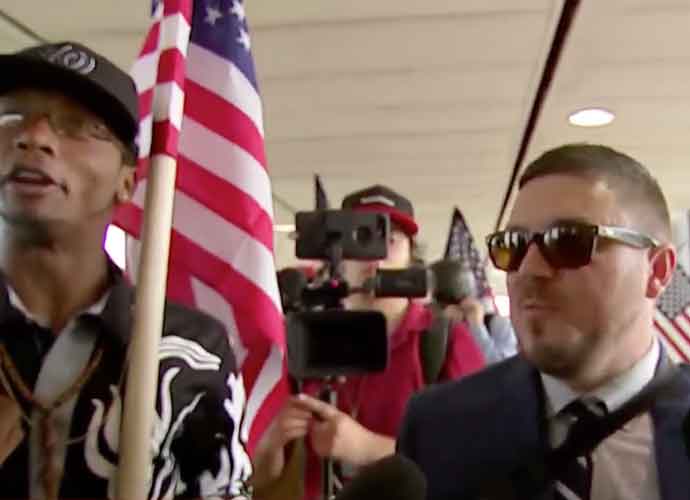 On Sunday, a small group of fewer than 30 white nationalists, who came to Washington, D.C. for the Unite the Right 2 rally, were vastly outnumbered by hundreds of counterprotesters.

The rally, organized by Jason Kessler, left the Lafayette Square park not long after they arrived. A huge crowd of anti-racist demonstrators, chanting “Nazis go home!” and “Shame! Shame! Shame,” had been gathering throughout the day as part of a series of demonstrations led by members of 40 anti-racism groups.

Kessler blamed the low turnout on logistical issues and confusion regarding the group’s transportation — a claim echoed by at least two men who spoke to reporters. “People are scared to come out after what happened last year,” one of the men told CNN.

The demonstration came at a time when the wounds from last year’s events in Charlottesville, Virginia, remain raw. At the time, Kessler organized the Unite the Right rally prompted by the city’s decision to remove a statue of Confederate Gen. Robert E. Lee. At the rally, counterprotester Heather Heyer was killed by a neo-Nazo sympathizer, who drove a car into a crowd.

Beside the death of Heyer, numerous people were injured. After the protests, the police of Charlottesville came under harsh criticism for failing to stop the violence and being not prepared.

Several days after the rally, at a contentious press conference, President Donald Trump prompted a political firestorm when he said “both sides” were to blame for the violence and there were “very fine people” on both sides of the conflicts in Charlottesville.

On Saturday, Trump tweeted about last year’s events, saying they “resulted in senseless death and division.”

The riots in Charlottesville a year ago resulted in senseless death and division. We must come together as a nation. I condemn all types of racism and acts of violence. Peace to ALL Americans!