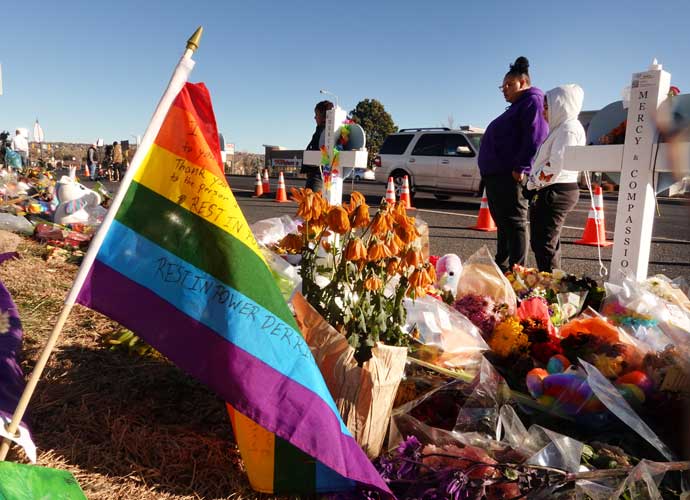 COLORADO SPRINGS, CO - NOVEMBER 22: Mourners at a memorial outside of Club Q on November 22, 2022 in Colorado Springs, Colorado. A gunman opened fire inside the LGBTQ+ club on November 19th, killing 5 and injuring 25 others. (Photo by Chet Strange/Getty Images)

A review of the past behavior of Anderson Lee Aldrich — the man accused of fatally shooting five people at a Colorado LGBTQ nightclub — shows that prosecutors, police and relatives failed to trigger a “red flag” law that could have kept him away from guns.

In 2021, Aldrich allegedly threatened his mother with a homemade bomb, forcing neighbors to evacuate. The bomb squad and crisis negotiators had to talk him into surrendering.

Despite that, there’s no record that prosecutors moved on with charges against him, or that police or relatives tried to trigger Colorado’s “red flag” law.

If that had happened, local authorities would be allowed to seize the weapons and the ammo Aldrich’s mother says he kept with him.

“We need heroes beforehand — parents, co-workers, friends who are seeing someone go down this path,” said Colorado state Rep. Tom Sullivan (D), whose son was killed in the Aurora theater shooting and sponsored the state’s red flag law passed in 2019. “This should have alerted them, put him on their radar.”

Colorado has one of the lowest rates of red flag law usage. Since the law took effect in 2019, courts issued 151 gun surrender orders — three for every 100,000 adults in the state. That’s a third of the ratio of orders issued for the 19 states and the District of Columbia with similar laws.

Aldrich, 22, is being held on five counts of murder and five counts of hate crimes. He’s in custody while being hospitalized. According to the police, he had not made a statement as of late Monday morning.

The crime took place late at night on Saturday. Police received several 911 calls at 11:56 p.m. about a shooting at Club Q, a gay club in Colorado Springs. Officers arrived at the scene at 11:57 p.m. and the suspect was detained a few minutes later.

Police recovered two firearms at the scene: an AR-style rifle and a handgun. The long rifle was the main weapon used in the shooting, the officers added.