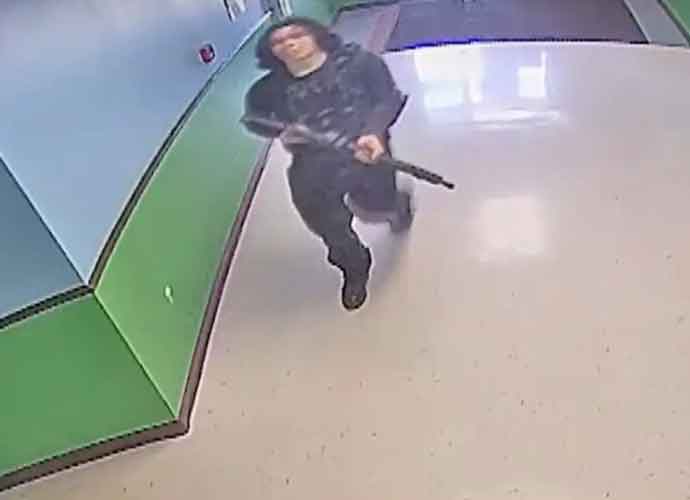 A new video showing critical moments before and during the elementary school shooting in Uvalde, Texas, that took the lives of 19 children and 2 teachers in May was released on Tuesday.

The video sparked outrage for two reasons. The first being the police reaction as they could be seen slow to react as the gunman spent nearly an hour in classrooms 111 and 112. The second being that the families of the victims should not have to see the gunman stalking the halls, entering the classroom and hearing the gunshots or having the video out in the public.

The footage, first published by the Austin American-Statesman and Austin ABC affiliate KVUE, shows the duration of the shooter, 18-year-old Salvador Ramos‘ time in the school. The police arrived around three minutes after Ramos entered. The video shows heavily armed officers pacing in the hallway, studying maps, talking or sending texts as they delayed entering the classroom.

Here’s the footage that Uvalde police tried to prevent being released.

It shows Cops running and hiding while 19 children & 2 teachers were being slaughtered. As innocent children screamed in pain, the “good guys with guns,” body armor, & rifles cowered.pic.twitter.com/bkbOiMnFKk

“Whoever leaked that video… I pray that you never have to deal with what all the parents, grandparents, siblings, aunts, uncles are dealing with. Shame on you,” a family member of one of the victims said during a press conference in Washington, D.C.

Other victims’ family members had a different perspective.

“I am happy it is released. But I wish they would have waited until the family members got to see it beforehand,” family member Jesse Rizo told San Antonio CBS affiliate KENS 5.

Uvalde Mayor Don McLaughlin also condemned the news sources for releasing the video publically before giving family members the opportunity to view it.

“They need to see the video, but they don’t need to see the gunman going in there. They don’t need to listen to those gunshots. They know what happened in that classroom. Why put them through that?” McLaughlin told ABC News. “And half of these families are out of town right now in Washington, D.C., not even with the rest of their family […] I’m sorry. That’s wrong. These families were blindsided and it shouldn’t have been done this way.”

KVUE and the Austin American-Statesman released a statement responding to the backlash.

“Both media outlets have elected to release that footage Tuesday to provide transparency to the community, showing what happened as officials waited to enter that classroom,” it said.