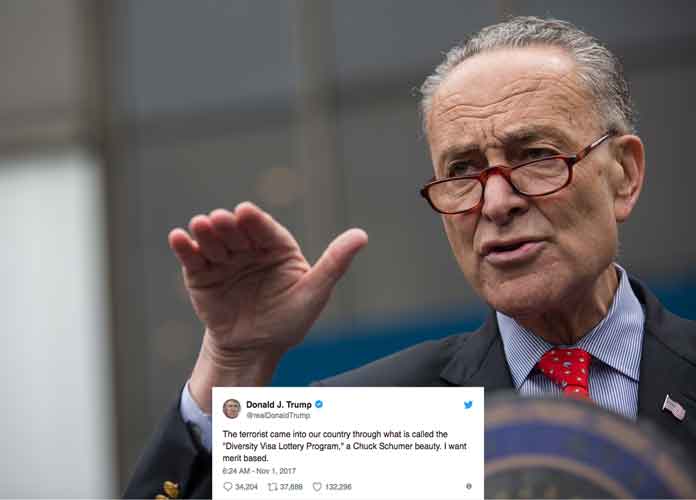 Talking to Anderson Cooper of CNN, Schumer said, “This was one of the worst few days in American foreign policy, in American diplomatic history, in a long time.” What he was referring to was Trump’s weekend meeting with Kim in which the New York tycoon became the first American president to ever set foot in North Korea.

"This was one of the worst few days in American foreign policy in American diplomatic history in a long time." Sen. Minority Ldr. Chuck Schumer says Trump "admires these strong men. He doesn't have principles about what rule of law is, what a democracy is" https://t.co/KMpYmfeJeB pic.twitter.com/KBe2jEpEgD

Schumer attacked Trump for his sudden chummy relationship with Kim, criticizing the president for calling the North Korean leader a “friend” without achieving any new concessions from him. “They have more nuclear bombs than they’ve had in the past. They are a danger to the United States and he pats the guy on the back and gets nothing in return,” Schumer said.

The senator continued on by stating that while Trump had previously attacked past presidents for being unable to denuclearize North Korea, his “erratic” policies were even more detrimental to American security. “It’s reality show foreign policy. He wants that photo op, he wants that little hit,” Schumer said. “He had no strategic, long-range sense of where to go or what to do, and if anyone thinks this doesn’t hurt America in the short term and the long run they’re sadly mistaken.”

Schumer’s comments come as relations between America and North Korea improve after months of tension. The diplomatic ties holding the two nations together frayed after the failure of February’s summit in Hanoi, Vietnam. Trump and Kim were unable to reach an agreement then, and the meetings were cut short as both parties grew increasingly frustrated over their opponent’s unwillingness to compromise. Trump’s recent visit to North Korea bodes well for the state of negotiations, indicating that both countries may be willing to return to the table to resume the construction of a deal.