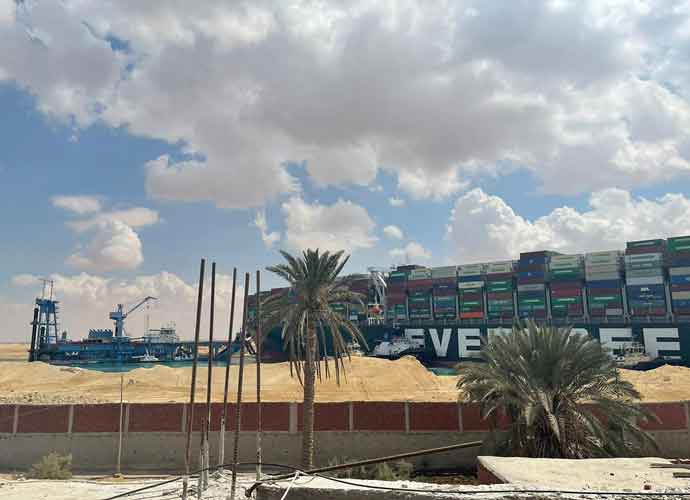 The specialized dredger 'Mashoor' assists in attempts to dislodge the stuck container ship 'Ever Given' on the Suez Canal, in Egypt, on Friday, March 26, 2021. Efforts to dislodge the massive Ever Given container vessel blocking the Suez Canal will take until at least next Wednesday, longer than initially feared, raising the prospect that the incident will trigger disruptions across global supply chains from oil to grains to cars. (Image: Getty)

Cargo Ship Ever Given Blocks Suez Canal, Could Take Weeks To Move

Ever Given, the massive container ship, which ran aground in the Suez Canal in Egypt, continues to be stuck as tug boats tried to dislodge the ship on Friday.

The ship became horizontally wedged in the waterway following heavy winds. The cargo carrier is more than 1,300 feet long, about 193-feet wide and weighs more than 200,000 tons. One end of the ship was wedged into one side of the canal, with the other stretching nearly to the other bank.

Many tugboats were sent to the scene to assist in the re-float operation, which can take days or longer.

Peter Berdowski, CEO of Dutch company Boskalis, said, “we can’t exclude it might take weeks, depending on the situation.” Berdowski’s company is helping in the salvage efforts.

Bernhard Schulte, the vessel’s technical manager, said at 8:30 a.m. that an earlier attempt to re-float the vessel had failed and another re-float attempt would be made later on Thursday.

“Dredging operations to assist re-floating the vessel continue. In addition to the dredgers already on site, a specialized suction dredger has arrived at the location,” the firm said.

The 120-mile long man-made waterway is a key point of global trade, connecting a steady flow of goods from East to West.

According to the Suez Canal Authority, around 19,000 ships passed through the canal during 2020, an average number of 51.5 per day. The ship was sailing from China to Rotterdam when it ran aground.

“Dredgers are working to clear sand and mud from around the vessel to free her. Tugboats, in conjunction with Ever Given’s winches, are working to shift the vessel,” Schulte said Wednesday evening.

There were no reports of injuries among the 25 crew members and no cargo has been damaged.