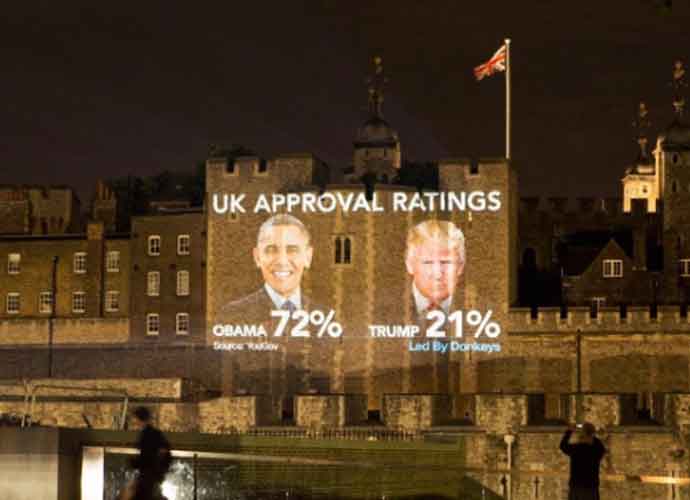 A group made up of British political activists has been trolling Donald Trump during his visit to the United Kingdom by projecting onto famous British landmarks things such as his approval rating versus that of Barack Obama. The organization projected a graphic onto the Tower of London that depicted the approval of current President Trump versus former President Obama, 21% and 72% respectively. A tweet from the group reads, “Just so you know, you’re wildly unpopular here in Britain. SAD! People REALLY don’t like you (though they love @BarackObama). Hope you like seeing your FAILING approval numbers projected onto the Tower of London.”

Hi @realDonaldTrump. Just so you know, you’re wildly unpopular here in Britain. SAD! People REALLY don’t like you (though they love @BarackObama). Hope you like seeing your FAILING approval numbers projected onto the Tower of London. #TrumpUKvisit pic.twitter.com/oT332Fd6fE

In addition to this projection, the activists also displayed a picture of a hat bearing the image of the USS John S. McCain onto the wall of Madame Tussaud’s wax museum. This is a reference to the White House’s recent request for the USS John S. McCain, a warship stationed in Japan, to be moved before Trump was to make an address in front of it. Whoever made the request was likely attempting to prevent the president from insulting the deceased Sen. John S. McCain (R-Arizona), who was frequently at odds with Trump.

These attacks are just part of a larger wave of demonstrations against the president that have been sweeping the streets of London. In order to show their dislike of Trump, the city’s residents have shown up in droves to protest against him and the way in which he has been leading America. Even though Britain has been subjected to an increase in populism just as the U.S. has been, many in the country’s capital still despise Trump and view him as a demagogue. Activists have vowed to follow the president around during his entire visit to Britain, bringing with them a massive inflatable baby Trump balloon, complete with smartphone and diaper.