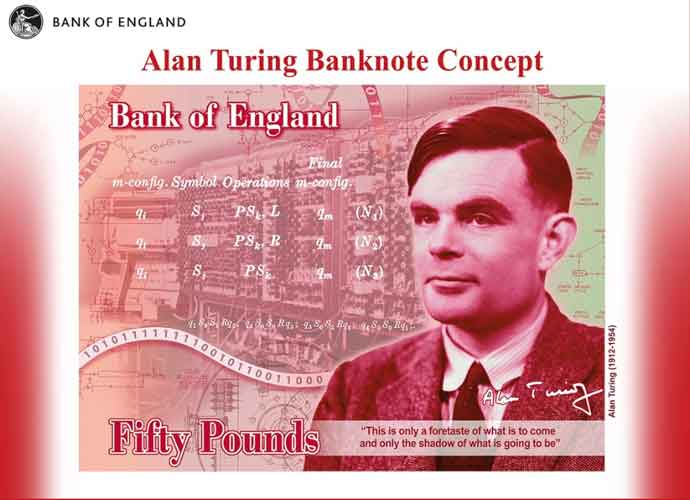 The Bank of England has announced that it will feature Alan Turing, a gay WWII codebreaker who provided the theoretical basis for much of modern computing and artificial intelligence, on its redesigned 50-pound note, honoring the scientist who was convicted of homosexuality under Victorian-era laws and forcefully chemically castrated.

“Alan Turing was an outstanding mathematician whose work has had an enormous impact on how we live today,” Mark Carney, the governor of the Bank of England, said in a statement. “As the father of computer science and artificial intelligence, as well as a war hero, Alan Turing’s contributions were far-ranging and path breaking.”

“Turing is a giant on whose shoulders many now stand,” added Carney.

We’re delighted that Alan Turing has been chosen by the @bankofengland as the face of the new £50 note.

Turing was the father of modern computing, a pioneer in #artificialintelligence and instrumental in the breaking of Enigma @bletchleypark during #WWII#Turing50 pic.twitter.com/raRGoBtogx

Turing’s addition to the British monetary system is the result of a Bank of England redesign process begun last year. In 2018 the entity announced that it would be selecting a new British scientist to recognize on the country’s highest denomination bill. The bank picked Turing out of a list of over 200,000 nominees, including Charles Babbage, Stephen Hawking, Ada Lovelace, and Margaret Thatcher (she was a chemical researcher before she began her famous career in politics). The current bill, which came out in 2011, features James Watt, the inventor of the steam engine, and Michael Boulton, the financier who backed him.

Turing has gained prominence in recent decades as the secrecy surrounding his work and his life fades. Most of his original work was kept under lock and key as part of the British war effort, and his homosexuality was extremely taboo at the time. It is widely believed that Turing committed suicide as a result of the hormone treatments he was forced to undergo by eating an apple laced with cyanide.

Over the past ten years, Turing has gained public attention as a result of several campaigns to posthumously exonerate him of the crimes for which he was convicted. In 2009 a British programmer created a petition for the government to apologize for the way in which Turing was treated. After gaining over 30,000 signatures, then-Prime Minister Gordon Brown acknowledged the government’s mishandling of one of its greatest minds, saying on behalf of the government, “We’re sorry, you deserved so much better.”

In 2013 Turing was posthumously pardoned by Queen Elizabeth II for his crimes of homosexuality, one of only four royal pardons granted since WWII.