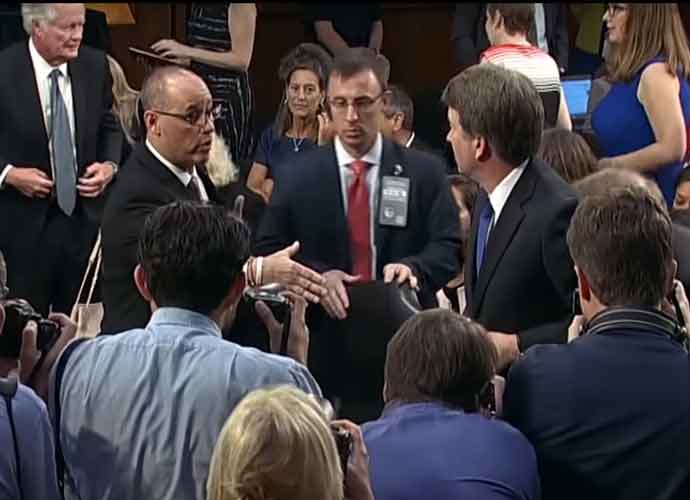 Brett Kavanaugh refuses to shake the hand of Fred Guttenberg, the father of the Parkland Shooting victim

President Donald Trump’s Supreme Court nominee, Brett Kavanaugh, refused to shake hands with the father of a student killed in the school shooting in Parkland, Florida.

At the Supreme Court confirmation hearing Monday, Fred Guttenberg, whose 14-year-old daughter Jaime Guttenberg died in the shooting at Marjory Stoneman Douglas High School earlier this year, was reaching out his arm for a handshake with the nominee. Kavanaugh turned to look at him and then turned the other way and walked away.

WATCH: Fred Guttenberg, the father of a Parkland school shooting victim, approaches Brett Kavanaugh during a break in his confirmation hearing, but when he attempted to shake the Supreme Court nominee’s hand, Kavanaugh appears to walk away. https://t.co/U2w8doDZr5 pic.twitter.com/xyQwhWHARr

Guttenberg, who attended the hearing as Senator Dianne Feinstein’s guest, is a vocal advocate for gun control since the death of his daughter. After the morning session for the hearing ended, Guttenberg wrote on Twitter that he “walked up to Judge Kavanaugh” and attempted to introduce himself “as Jaime Guttenberg’s dad. I guess he did not want to deal with the reality of gun violence.”

Just walked up to Judge Kavanaugh as morning session ended. Put out my hand to introduce myself as Jaime Guttenberg’s dad. He pulled his hand back, turned his back to me and walked away. I guess he did not want to deal with the reality of gun violence.

As Judge Kavanaugh left for his lunch break, an unidentified individual approached him. Before the Judge was able to shake his hand, security had intervened. https://t.co/ylOhtA1s6G

Guttenberg replied on Twitter that this account wasn’t accurate. “Incorrect. I was here all day and introduced by Senator Feinstein. No security involved. He turned and walked away,” Guttenberg wrote.

Incorrect. I was here all day and introduced by Senator Feinstein. No security involved. He turned and walked away.

A video captured by CSPAN backs up Guttenberg. Although a security guard was present, Kavanaugh looked Guttenberg in the eye as he introduced himself, and then turned around to walk the other way.

The NRA has pledged to spend at least $1 million on pro-Kavanaugh ads.

Trump’s team will try to brush Kavanaugh’s diss of a Parkland Dad aside by saying “security intervened”.

But here’s the video, and it offers an even more damning glance into the soul of a man very comfortable ignoring us commoners. pic.twitter.com/E2xqeK2sIz