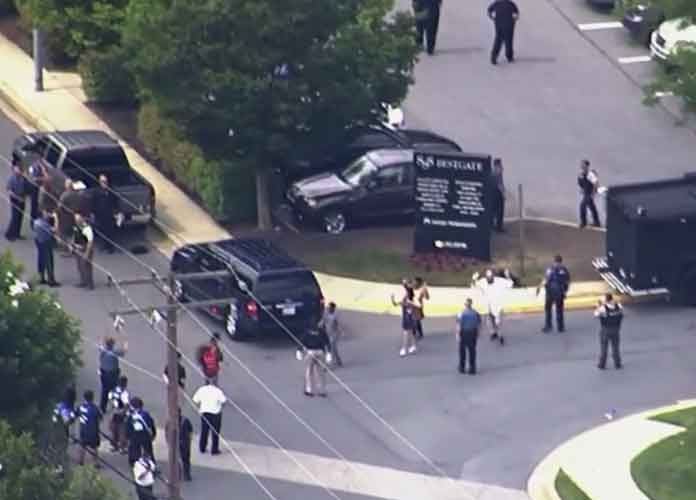 On Thursday afternoon, five people were murdered and many others were severely wounded in a shooting at the Capital Gazette newspaper in Annapolis, Maryland.

The lone shooter, believed to have used a shotgun, is reportedly in custody but is not cooperating with authorities.

One intern at the newspaper named Anthony Messenger stated the address of the Capital Gazette and pleaded for help in a tweet around 3 p.m. EST after he learned of the active gunman:

Another journalist named Phil Davis said on Twitter that the perpetrator fired shots through the glass door of the office. People were quickly evacuated from the building and local police soon began searching the area.

“I’m a police reporter. I write about this stuff — not necessarily to this extent, but shootings and death — all the time,” Davis said in an interview with the Capital Gazette‘s website. “But as much as I’m going to try to articulate how traumatizing it is to be hiding under your desk, you don’t know until you’re there and you feel helpless.”

Maryland Gov. Larry Hogan and President Donald Trump both responded to the tragedy on Twitter, with the former saying he was communicating with local police and other investigators.

“Please, heed all warnings and stay away from the area,” Hogan urged people in his tweet.

Absolutely devastated to learn of this tragedy in Annapolis. I am in contact with County Executive Steve Schuh, and @MDSP is on the scene assisting @AACOPD. Please, heed all warnings and stay away from the area. Praying for those at the scene and for our community. https://t.co/bI6PdUjHfh

Prior to departing Wisconsin, I was briefed on the shooting at Capital Gazette in Annapolis, Maryland. My thoughts and prayers are with the victims and their families. Thank you to all of the First Responders who are currently on the scene.

The shooting is the latest in a series of massacres that have occurred across the country in the last year, several of them at schools. However, others have been at offices like this one. In April, a woman injured four people in a shooting at YouTube’s headquarters in San Bruno, California. The perpetrator was the only one to die in that incident. The national debate on gun control has grown stronger in recent months in the wake of these tragedies, and politicians have spouted many different theories about the reasons for which they happen, from violent video games to drugs and pornography.

‘The Baltimore Sun’ Defends Its City In Angry Anti-Trump Op-Ed: ‘Better To Have A Few Rats Than To Be One!’