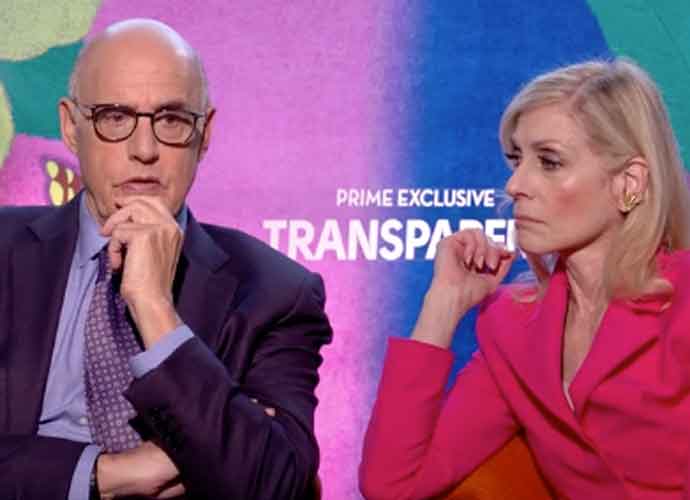 Tambor stated that he stood for the rights of trans people, and that he was against the ban. “I think a few people are trying to get something done that shouldn’t be done, I’m totally opposed to it. I think the populous in general is keeping the status quo and not changing, I think that will ride itself,” he said strongly. “On the other hand, it makes me drive a little faster to Paramount Studio to get our work done ’cause enough of this nonsense, these are people who are defending the country and need to be respected, and I just don’t agree, nor would Maura, Maura would be furious. So both Maura and I are furious.”

Tambor plays Maura Pfefferman on the Amazon original series Transparent, who is a trans woman. Light, who plays Maura’s ex-wife, believes that people should turn their anger into something more productive. “I am very very upset in relation to it, but my upsetedness isn’t useful. The only way in which it’s useful is that, like Jeffrey said, we drive faster to Paramount. There are actions to be taken, we get to be in a show like this ad we get to talk to you and we get to say the things that we feel about it in relation to it… we have the ability to have some action in relation to this and speak to the concern that we have.”

Tambor adds that, “It’s really interesting that our show has such a comic slant to it, and I think laughter and satire exposes, you know, there’s ignorance before hatred, and we get to educate, and we also get to expose the haters through laughter, and enough of this. Enough of this. Enough.”

“And we’re talking about true courage, and true service, and true altruism, and it’s being tossed aside in a very cavalier way,” Light says. “And what you just said is really powerful, before hatred, ignorance is the first step. And we must make sure that the ignorance is dispelled in order for the hatred to be expelled.

Tambor noted how his nine-year-old daughter joined him on set a few years ago, and he was nervous about explaining why he was dressed as a woman, as well as the concept of being transgender to her in a way that she understood. “She said, ‘Daddy I understand, the character you play is more comfortable being a woman.’ That’s from the mouth of a nine-year-old, so everybody needs to get in step,” he concluded.