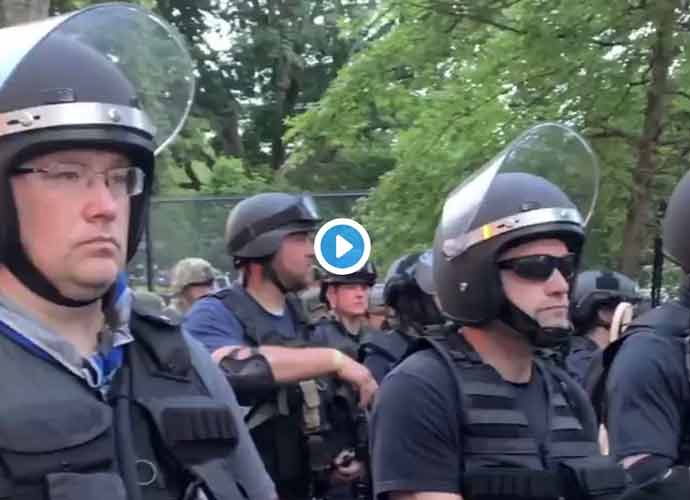 A multitude of law enforcement agencies were stationed throughout Washington D.C. on Wednesday in an effort to guard federal property and suppress unrest arising from the death of George Floyd at the hands of a Minneapolis police officer.

Some wore generic clothing and lacked name tags or badges, sparking concerns that there could be less accountability if the agents overreacted.

Completely unmarked officers in riot gear holding protesters blocks away from the White House. No badges. No insignias. No name tags. Nothing. Refused to tell us who they’re with. #DCprotest #DCprotests pic.twitter.com/c4lFFCsX48

Back outside the White House. Today the perimeter has been pushed back another half block. Federal law enforcement of some kind, but they won’t identify themselves, and all insignias and name plates have been removed. pic.twitter.com/q5dmdMgkLV

The Federal Bureau of Investigation, the Bureau of Alcohol, Tobacco, Firearms and Explosives (ATF),  the Drug Enforcement Administration (DEA), the U.S. Marshals and the federal Bureau of Prisons were tied into the property protection efforts by the Justice Department. Those groups join Homeland Security, the D.C. Metropolitan Police Department, the Capitol Police, the Federal Protective Service, the Secret Service and the District of Columbia National Guard in responding to the protests.

Rep. Don Beyer (D-Virginia) and Del. Eleanor Holmes Norton (D-D.C.) are drafting a bill which would require federal law enforcement officers to clearly display their names and respective agencies when stationed at protests.

“When you can’t tell who people are, then there is no accountability at all,” Beyer told HuffPost. “You can go out and bust any heads you want to because who is going to hold you accountable if you are anonymous — especially with the big face masks.”

Beyer hopes to bring the bill up for a vote within the next two months.