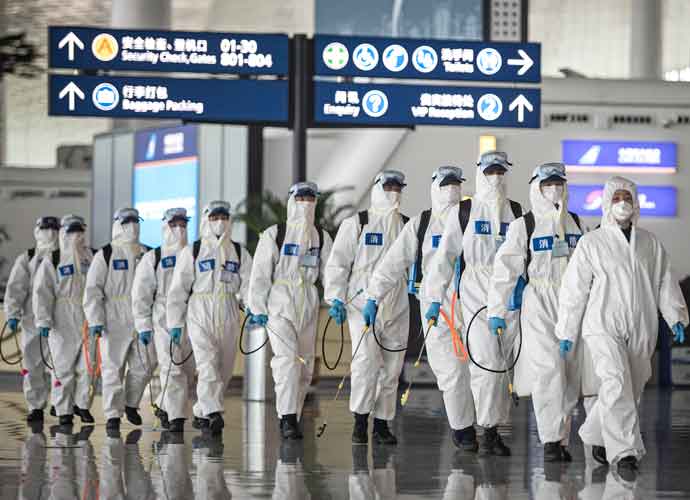 WUHAN, CHINA - APRIL 03: （CHINA OUT）Firefighters prepare to conduct disinfection at the Wuhan Tianhe International Airport on April 3, 2020 in Wuhan, Hubei Province, China. Wuhan, the Chinese city hardest hit by the novel coronavirus outbreak, conducted a disinfection on the local airport as operations will soon resume on April 8 when the city lifts its travel restrictions. (Image: Getty)

A team of international and Chinese scientists has been searching for COVID-19’s origins ever since it was first detected in China a year ago and caused the worldwide pandemic.

The team said that they cannot conclude definitively the source, but do not think it was likely that it was from a Chinese lab.

There are currently four theories being considered, with one clear frontrunner.

The writings of 10 international epidemiologists, data scientists, veterinary, lab and food safety experts who visited China and the city of Wuhan are included in the report.

Critics have insisted that China’s government has prevented the team from being objective. However, others defending the World Health Organization (WHO), which assembled the team, argue it couldn’t simply parachute in experts into a country without cooperation from the host, especially one as powerful as China.

Vladimir Dedkov, an epidemiologist and deputy director of research at the St. Petersburg Pasteur Institute in Russia, summarized the four main leads and suspected origins of the first infection in humans: from a bat through an intermediary animal; straight from a bat; contaminated frozen food products; from a leak from a laboratory, like the Wuhan Institute of Virology.

Dedkov suggested frozen foods have something to do with the contamination. An infected person likely brought and spread the virus at the Wuhan wet market associated with the outbreak, where some of the contaminated products were later found.

The third theory has been promoted by both officials in China and Chinese team leader Liang Wannian. The U.S. supported the fourth theory, the lab leak, under the Trump administration.

The 280-page report set out recommendations and laid the groundwork for the next steps, such as whether the team or others get new access to China for further analysis.

The team hopes to find clues to help prevent another deathly pandemic in the future.