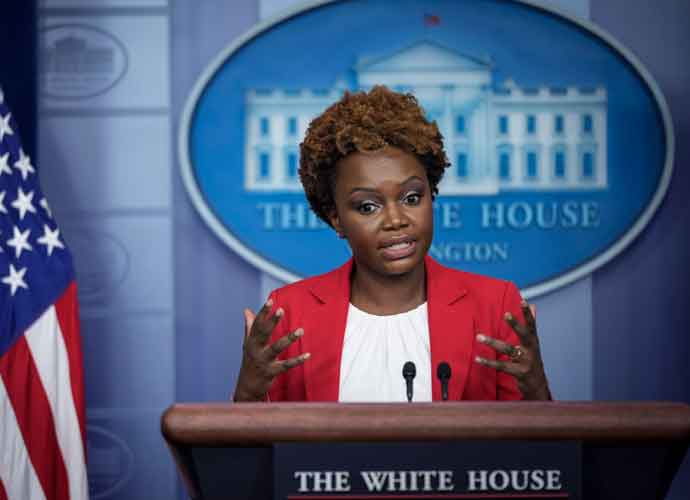 WASHINGTON, DC - NOVEMBER 04: White House Deputy Press Secretary Karine Jean-Pierre speaks during the daily press briefing at the White House November 04, 2021 in Washington, DC. Jean-Pierre was filling in for White House Press Secretary Jen Psaki, who tested positive for Covid-19 over the weekend. Psaki will remain home for at least 10 days before returning to work in person. (Photo by Drew Angerer/Getty Images)

White House Press Secretary Jen Psaki introduced her successor Karine Jean-Pierre, who has served as her deputy since the beginning of the Biden administration, dubbing Jean-Pierre as her “partner in truth.” Jean-Pierre will also become the first black and openly gay press secretary in White House history.

“Karine not only brings the experience, talent and integrity needed for this difficult job, but she will continue to lead the way in communicating about the work of the Biden-Harris Administration on behalf of the American people,” President Joe Biden wrote in a statement announcing Jean-Pierre’s elevation.

Jean-Pierre previously served in the Obama administration as the regional political director for the White House Office of Political Affairs, a senior advisor at progressive organization MoveOn, a political analyst for NBC News and MSNBC and as an advisor on the Biden 2020 campaign.

“This is a historic moment, and it’s not lost on me,” Jean-Pierre said after being introduced at Thursday’s press conference. “I understand how important it is for so many people out there, so many different communities, that I stand on their shoulders and I have been throughout my career.”

Psaki is leaving the Biden administration, likely for MSNBC, with her last day slated for May 13.

“Jen Psaki has set the standard for returning decency, respect and decorum to the White House Briefing Room,” Biden in the statement. “I want to say thank you to Jen for raising the bar, communicating directly and truthfully to the American people, and keeping her sense of humor while doing so.”