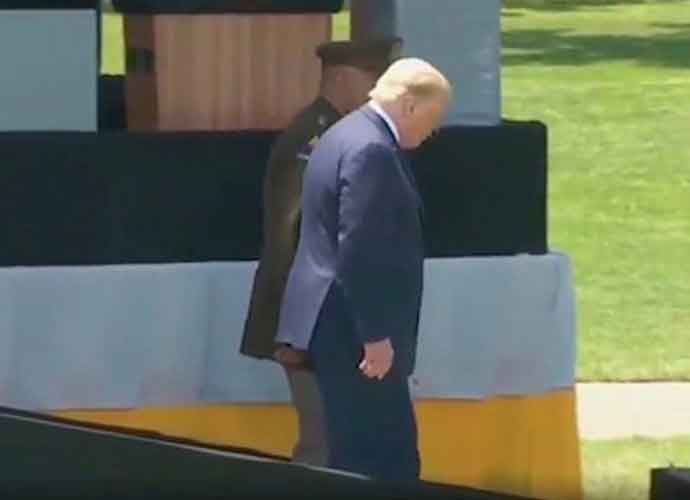 President Donald Trump‘s health is being questioned after his cautious walk down the ramp at the graduation ceremony for the U.S. Military Academy at West Point went viral online.

A day before his 74 birthday, Trump appeared at the commencement ceremony at the United States Military Academy at West Point, which was originally postponed due to coronavirus pandemic and addressed the military cadets. After his speech, Trump carefully walked down the ramp, taking one step at a time.

Another video shows Trump struggling to hold a glass to take a sip of water. He is seen helping himself to move a glass to his mouth with the left hand.

Trump descended a ramp extremely carefully at the end of his West Point speech today pic.twitter.com/uMG3KyB1V1

After the videos of the incidents were posted on social media raising concerns about his health and age, Trump tweeted in his defense to the rumors, saying the ramp was “very long, “steep” and “very slippery.”

The ramp that I descended after my West Point Commencement speech was very long & steep, had no handrail and, most importantly, was very slippery. The last thing I was going to do is “fall” for the Fake News to have fun with. Final ten feet I ran down to level ground. Momentum!

Trump is known to comment on the health of his rivals. In 2016, Trump’s campaign released a video ad, criticizing Hilary Clinton‘s “health and stamina” after she was videotaped stumbling when she got into a car after her 9/11 address at the World Trade Center in New York City.

“Hillary Clinton doesn’t have the fortitude, strength or stamina to lead in our world,” the ad said. “She failed as Secretary of State. Don’t let her fail us again.”

Crazy Joe Biden is trying to act like a tough guy. Actually, he is weak, both mentally and physically, and yet he threatens me, for the second time, with physical assault. He doesn’t know me, but he would go down fast and hard, crying all the way. Don’t threaten people Joe!

In 2014, Trump also commented on former President Barack Obama‘s manner of getting off the plane, calling it “inelegant” and “unpresidential.”

The way President Obama runs down the stairs of Air Force 1, hopping & bobbing all the way, is so inelegant and unpresidential. Do not fall!