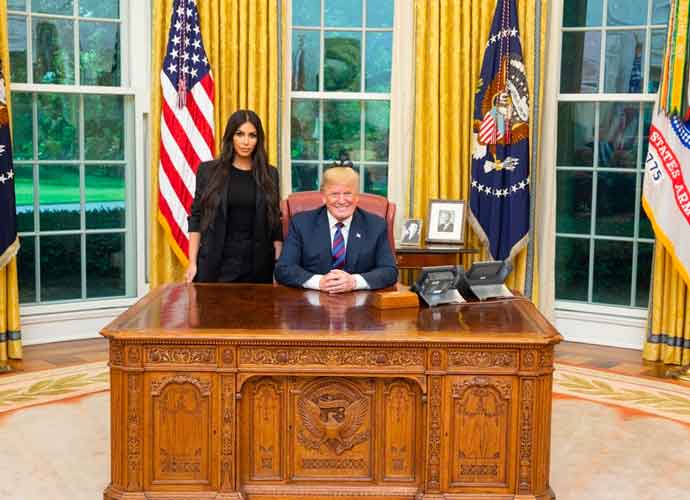 President Donald Trump is coming under fire for his Super Bowl LIV ad in which he took credit for granting clemency to a first-time non-violent drug offender, Alice Marie Johnson. The case gained publicity due to the lobbying efforts of Kim Kardashian.

Kardashian advocated alongside a team of lawyers to free Johnson, who had served 21 years of a life sentence in prison after she was convicted on charges of conspiracy to possess cocaine and attempted possession of cocaine. Her work led to an Oval Office meeting with Trump in 2018.

A week after the meeting, Trump granted clemency to Johnson.

Kardashian first learned of Johnson’s plight after a video interview by Mic made its way onto her Twitter feed. She said the story “tugged at her heart.”

“Thanks to President Trump, people like Alice are getting a second chance,” the campaign ad read. “Politicians talk about criminal justice reform. President Trump got it done. Thousands of families are being reunited.”

Johnson, who is now a criminal justice reform advocate, tweeted the commercial.

“Two Super Bowls ago I sitting in a prison cell,” she wrote. “Today I am a free woman and my story was featured in a Super Bowl ad.”

Two Super Bowls ago I was sitting in a prison cell.

Today I am a free woman and my story was featured in a Super Bowl Ad.

I will spend the rest of my life fighting for the wrongly and unjustly convicted!

Viewers on Twitter were quick to point out that her release was a direct result of Kardashian’s efforts, and that Trump’s record of criminal justice reform is questionable.

In 2017, Trump defended deadly white supremacist violence at the rally in Charlottesville, saying there were “very fine people on both sides.”

He has continued to sanction the policy of separating families crossing the Mexico border, in a contradiction to the ad’s claim he is reuniting thousands of families — besides the fact he has only issued 18 presidential pardons.

According to the American Civil Liberties Union, U.S. immigration authorities have separated over 5,400 children from their families at the Mexico border from when Trump took office in 2016 until October 2019.

That ad was offensive AF.

Joyce Vance, a former federal prosecutor and law professor at University of Alabama, tweeted Monday that Johnson was released “because celebrities brought her to Trump’s attention.”

“She deserved it,” Vance continued. “But there are thousands more like her in prison. We need a real pardon process that works fairly. We need real criminal justice reform. Don’t be fooled.”

Alice Johnson is one person who won early release because celebrities brought her to Trump’s attention. She deserved it. But there are thousands more like her in prison. We need a real pardon process that works fairly. We need real criminal justice reform. Don’t be fooled. https://t.co/rx9TVXRqeI

During his presidency, Trump has issued 18 pardons and six commutations (meaning the sentence is changed to a less harsh penalty), according to the Department of Justice.

This statistic is significantly lower than every president dating back to McKinley in 1900 — which is the earliest clemency statistics were published by the DOJ.

Former President Barack Obama issued 212 pardons and 1715 commutations, although the majority occurred during his second term. However, on average Obama issued 20 pardons/commutations per month, compared to Trump’s minuscule .68/month.

Writer Parker Molloy commented that the decision to grant Johnson clemency was good, but “using the fact that you granted Alice Marie Johnson clemency in a Super Bowl ad to try to get re-elected” was “tacky af.”

Using the fact that you granted Alice Marie Johnson clemency in a Super Bowl ad to try to get re-elected: tacky af

“We see how you’re using us while you passed policies that hurt us,” Maya Contreras wrote.

Bloomberg and Trump both featuring Black women in anguish in their political ads during the #SuperBowlLIV.

We see how you’re using us while you passed policies that hurt us. #Elections2020

Kardashian did not comment about Trump taking credit for her work, but replied to Johnson “so proud of you!!!!”