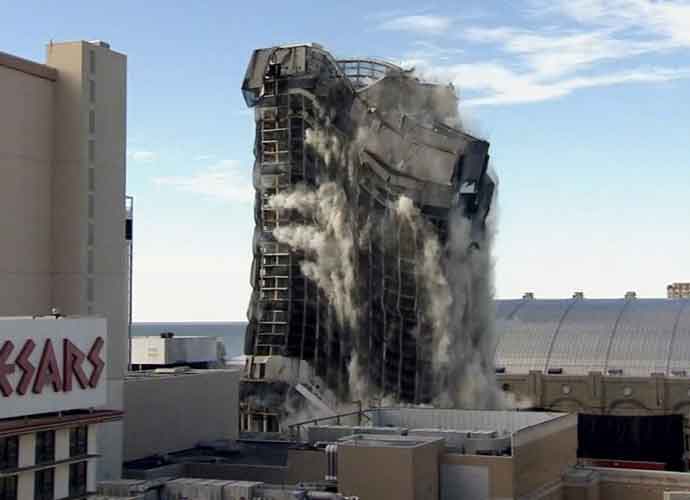 The Atlantic City Boardwalk in New Jersey rocked to life Wednesday morning as the once-bustling Trump Plaza Casino imploded during a planned demolition. From start to finish, the building fell in under 290 seconds. Once the centerpiece of the Trump empire, the casino closed in 2014 and has been in disrepair since.

“The way we put Trump Plaza and the city of Atlantic City on the map for the whole world was really incredible,” former events manager for Trump Plaza Bernie Dillion told ABC 6. “Everyone from Hulk Hogan to Mick Jagger and Keith Richards, it was the whole gamut of personalities. One night before a Tyson fight I stopped dead in my tracks and looked about four rows in as the place was filling up, and there were two guys leaning in close and having a private conversation: Jack Nicholson and Warren Beatty.”

Dillion was events manager for the casino from 1984 to 1991, the peak of the casino’s success. Trump Plaza’s decline is usually attributed to the bizarre opening of rivaling Trump Taj Mahal, which was just steps away from the plaza. On the increasingly saturated boardwalk, all Trump casinos saw a decline. Both properties closed, and were subsequently bought by billionaire Carl Icahn, who ordered Wednesday’s demolition.

Former President Donald Trump has distanced himself from his New York real estate roots since the start of his political career. The long-time New Yorker changed his residency to Florida in 2019 and in his post-presidency, spends his time sequestered in his resort, Mar-A-Lago. Trump has not commented Wednesday’s demolition, but New Jersey and New York natives, who voted en mass for Hillary Clinton in 2016 and Joe Biden in 2020, tuned into live-streams with vigor to watch the former casino fall.