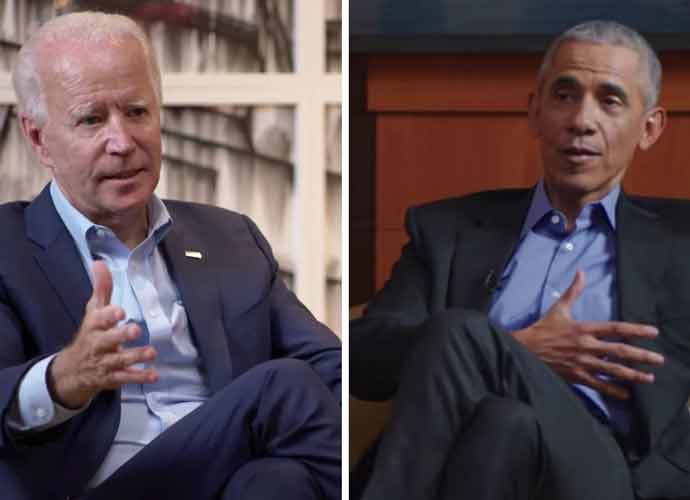 Presumptive Democratic nominee Joe Biden and former President Barack Obama appeared together in a video campaign ad Thursday, socially distanced, to encourage voters “to reassemble the kind of government that cares about people.”

“You know what it’s like, as much as anybody, to be in the White House in a crisis,” Obama told Biden. “You are going to be able to reassemble the kind of government that cares about people and brings people together.

The two spoke for 16 minutes about Biden’s main campaign points: President Donald Trump‘s recent failures and Biden’s experienced and qualifications to replace him in office.

Folks, I sat down with my friend President @BarackObama to discuss the significant moment we're in, who we are as a nation, and how we can build back better. Watch our full conversation: https://t.co/n2P71Le1oH

“Can you imagine standing up when you were president and saying, ‘It’s not my responsibility, I take no responsibility’?” Biden said.

“Those words didn’t come out of our mouths while we were in office,” Obama responded.

“You can’t separate out the public health crisis from the economy,” Obama also noted in the video. “If you want the economy growing, people have to feel safe.”

Trump attacked Obama on Twitter for making “a commercial” with Biden, despite not endorsing him during the Democratic primary – a deliberate choice he made to avoid swaying the results. Trump then said he was elected because of disapproval of Obama saying, “Remember, I wouldn’t even be here if it weren’t for them. I wouldn’t be president. They did a terrible job.”

However, nearly 56% of Americans have a positive view of Obama, according to YouGov polling, while Trump has only 41% and Biden 49%.

The video of the former president and his vice president racked up millions of views, as the campaign worked to advertise it by releasing excerpts ahead of time on Wednesday and Thursday. Biden’s campaign digital director, Rob Flaherty, said the first sneak peek alone received more than 10 million views, and caused email signups for campaign releases to triple on Wednesday.

The two also addressed issues of racial justice, with Obama saying Biden has always been willing to listen, learn and respond to these issues, before moving on to tackle health care – a prominent topic in Biden’s campaign platform that has only been amplified since the pandemic.

“I used to sit there and watch him in the bed and in pain and dying of glioblastoma,” Biden said of his older son, who passed away in 2015. “And I thought to myself, what would happen if his insurance company was able to come in, which they could have done before we passed Obamacare, and said: ‘You’ve outrun your insurance. You’ve outlived it. Suffer the last five months of your life in peace. You’re on your own.’”

“You and I both know what it’s like to have somebody you love get really sick, and in some cases to lose somebody,” Obama replied, adding that the ACA was a “starter house” and “beginning of the process” on which Biden could expand upon with his proposed public health insurance option.