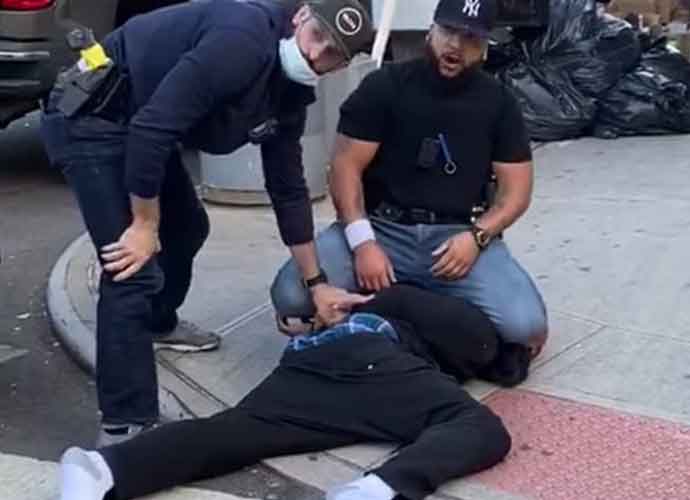 A video of a violent early-May arrest in Manhattan over social distancing protocol caused backlash over how coronavirus-related orders are being enforced in New York.

Eyewitness Daquan Owens, who filmed the video, told Gothamist the incident started after plainclothes officers approached a man and a woman talking outside a deli in the East Village and told them to separate. Owens says the two people were maintaining a six-foot distance.

Several officers in the video were not wearing masks as well.

Owens’s video begins as several plainclothes officers attempt to handcuff two people outside the deli. About 35 seconds in, one of the officers turns to bystander Donni Wright, 33, and points a taser at him before forcing him to the ground, hitting him and kneeling on his neck.

Owens says the officer, later identified as Francisco Garcia, called Wright the n-word, which can be heard at the 37-second mark, and Wright can be heard asking if the officer if he said that word.

In a statement, NYPD spokesperson Sergeant Mary Frances O’Donnell said “a group was observed” on the corner “in violation of social distancing orders.”

“Donni wasn’t being aggressive, he was just talking,” Owens said. “He never raised his hands or hit him. Cop just took it upon himself to start beating on him. I was standing right next to him. I could hear everything.”

The statement said that when officers approached the group to order them to disperse, “they observed a bag of alleged marijuana in plain view.” Another video shows security camera footage of the incident starting before police arrived.

Wright’s mother told the New York Daily News her son was hospitalized with severe injuries to his back, ribs and chest as a result of the arrest.

Garcia was placed on “modified assignment,” pending an investigation into the violent arrest, according to New York City police.

Garcia has a questionable history with the NYPD. He has been named in seven other lawsuits settled by the city for $210,000, including one case in which he was accused of being homophobic.

The video below may be disturbing for some readers.

New York City police have sidelined an officer who punched a man during an arrest over social distancing. Video shows the officer approaching an eyewitness, Donni Wright, with a taser on Saturday, before hitting him and throwing him to the ground. pic.twitter.com/8HTNRNQmnP

Police Commissioner Dermot Shea confirmed the incident is being investigated by the Internal Affairs Bureau.

“I think we can be better than that,” Shea said of the video, adding that the NYPD issued 51 summonses for social distancing violations that same day, in addition to these three arrests.