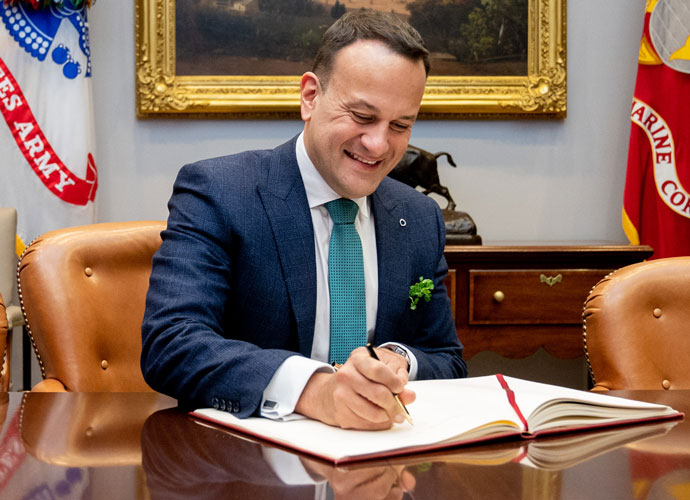 President Donald Trump wished Irish Prime Minister Leo Varadkar good luck on his border “wall” prior to a meeting between the two leaders. The Irish have been adamant that as part of the Brexit negotiations there be no hard border between Northern Ireland, which is a part of the U.K., and the Republic of Ireland, which is a separate E.U.-member country.

As a part of his trip to Europe to commemorate the WWII D-Day invasion, Trump traveled to Ireland to meet with the Irish prime minister and discuss post-Brexit relations between America and the Republic. During a quick exchange before the two began their closed meeting, the president said, “I think it will all work out very well, and also for you with your wall, your border,” before drawing parallels with the U.S. southern border with Mexico. “We have a border situation in the United States, and you have one over here. But I hear it’s going to work out very well here.” The Irish prime minister, taken aback, replied, “I think one thing we want to avoid, of course, is a wall or border between us.”

Trump seems to believe Ireland wants a border wall. Irish Taoiseach Leo Varadkar responded: "I think one thing we want to avoid, of course, is a wall."

As the Daily Mail writes, "Ireland's government believes that bringing back a physical border would risk the peace."
Via RTE pic.twitter.com/5Jo94GH3R2

Ever since the Good Friday Agreement of 1998 ended the decades-old conflict between Northern Ireland and the southern Republic of Ireland, there has been relative peace in the region. However, because Northern Ireland is still a part of the United Kingdom, it will leave the European Union with the rest of the U.K. This has created a whole host of problems over how to implement Brexit with regards to movement between Northern Ireland and the Republic, such as how to deal with customs, citizenship and security. The entire situation has only been made even more complicated by the demand of the Republic of Ireland that there be no hard border between it and the North. The idea of implementing anything even remotely resembling a border wall in Ireland would be catastrophic, showing the president’s lack of knowledge of world politics – and his willingness to talk about a subject he knows little about.