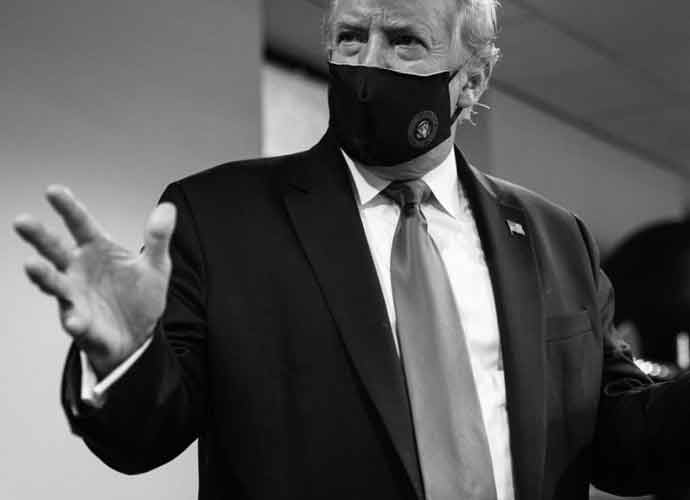 Trump Tweets His Photo Wearing A Mask, Calling It 'Patriotic'

Trump Tweets His Photo Wearing A Mask, Calling It ‘Patriotic’

President Donald Trump tweeted a photo of himself wearing a mask and described it as “patriotic.”

“We are United in our effort to defeat the Invisible China Virus, and many people say that it is Patriotic to wear a face mask when you can’t socially distance,” Trump tweeted Monday. “There is nobody more Patriotic than me, your favorite President!”

We are United in our effort to defeat the Invisible China Virus, and many people say that it is Patriotic to wear a face mask when you can’t socially distance. There is nobody more Patriotic than me, your favorite President! pic.twitter.com/iQOd1whktN

The image shows Trump in a mask during his visit to Walter Reed National Military Medical Center earlier this month. It was the first and only time the president wore a mask at a public event after him previously expressing a lack of desire to wear it in public. On a trip to a Ford plant in May. Trump wore a mask without a presence of press because he “didn’t want to give the press the pleasure of seeing it.” He also criticized Biden for wearing a mask on a number of times, saying it was unnecessary to wear one outside and said it didn’t look presidential.

“Somehow sitting in the Oval Office behind that beautiful Resolute Desk … I think wearing a face mask as I greet presidents, prime ministers, dictators, kings, queens. I don’t know, somehow I don’t see it for myself. Maybe I’ll change my mind,” Trump said at the time.

The change of narrative comes amid low national polls, where Biden is leading by large margins, Trump’s embrace of mask wearing comes after heavy “pleading” by aides in order to set an example for the public.

Trump will not consider implementing a national mask mandate. In a recent interview with Chris Wallace for Fox News, Trump said: “No, I want people to have a certain freedom, and I don’t believe in that, no.”

The contradictory mask comments came early in the pandemic, where there was a lack of information about the virus, as well as there was a national mask shortage that was problematic for healthcare workers. Now, however, healthcare professionals have confirmed that wearing a mask is an effective measure to reduce the spread of coronavirus.

“I’m pleading with your viewers, I’m begging you, please understand that we are not trying to take away your freedoms when we say wear a face covering,” he said. “We are saying if we do these things, we can actually open and stay open.”