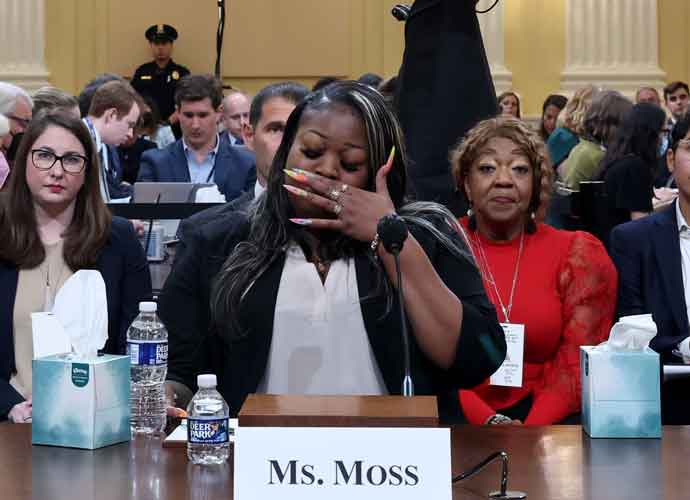 WASHINGTON, DC - JUNE 21: Wandrea ArShaye “Shaye” Moss, former Georgia election worker, becomes emotional while testifying as her mother Ruby Freeman watches during the fourth hearing held by the Select Committee to Investigate the January 6th Attack on the U.S. Capitol on June 21, 2022 in the Cannon House Office Building in Washington, DC. The bipartisan committee, which has been gathering evidence related to the January 6, 2021 attack at the U.S. Capitol for almost a year, is presenting its findings in a series of televised hearings. On January 6, 2021, supporters of President Donald Trump attacked the U.S. Capitol Building in an attempt to disrupt a congressional vote to confirm the electoral college win for Joe Biden. (Photo by Michael Reynolds-Pool/Getty Images)

Freeman and her daughter, Wandrea “Shaye” Moss, have been baselessly attacked by Trump and former Trump lawyer Rudy Giuliani for “ballot box stuffing.”

Both federal and state officials have found no evidence that either election worker did anything illegal. Trump was told by at least one Justice Department official that the attacks on Freeman and Moss were a lie.

The new attacks, posted on Truth Social, leave Trump susceptible to other lawsuits. Freeman is currently suing Giuliani for defamation but was barred from suing Trump as a sitting president. Now that he has re-engaged his attacks after his presidency, he can be sued. Trump is fighting a defamation suit against E. Jean Carroll, a woman who has accused him of rape.

“Don’t forget that Ruby Freeman, her daughter, and all others were rushed out of the voter count room in Georgia because of a big ‘WATER MAIN BREAK,'” Trump wrote on his social media website. “Like everything else, it was FAKE, there was no water main break. Ruby’s group (only) soon came back into the room, with no security or vote watchers, grabbed the thousands and thousands of ballots hidden under a cloth skirted table, and began putting them into (STUFFING) the machines, all caught on tape, and so OBVIOUSLY WRONG. They can’t explain!”

Trump has repeated baseless fallacies of voter fraud in Georgia since his election loss in 2020.

Both Freeman and Moss were among 12 recipients of the Presidential Citizens Medal. President Joe Biden awarded the election workers the prize two years after the Capitol Insurrection.