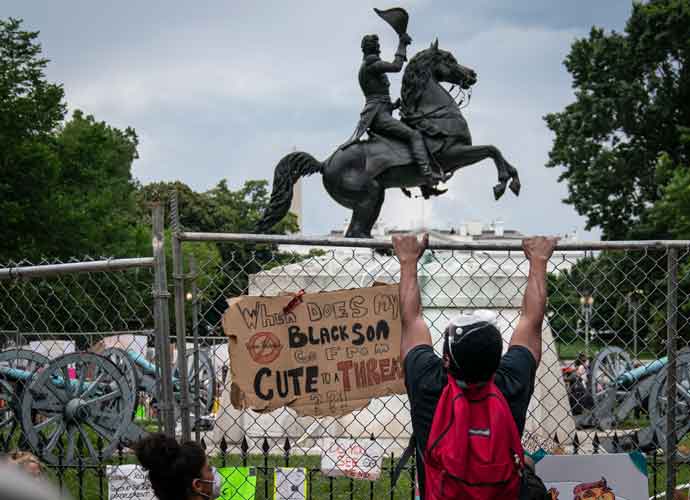 WASHINGTON, DC - JUNE 22: Protesters pull down a fence surrounding the statue of Andrew Jackson in an attempt to pull the statue down in Lafayette Square near the White House on June 22, 2020 in Washington, DC. Protests continue around the country over police brutality, racial injustice and the deaths of African Americans while in police custody.

President Donald Trump is planning to create a “National Garden of American Heroes,” which he described as “a vast outdoor park that will feature the statues of the greatest Americans to ever live.”

During the Independence Day celebration at Mount Rushmore, Trump gave a speech in which he promised to establish a “National Garden of American Heroes” through an executive order as part of his second term plan.

In his speech, Trump condemned the destruction of monuments dedicated to Confederacy and colonialism by the anti-racism protestors, who he called “angry mobs.” He said that the protestors advocating for renaming the Confederate military sites and removal of the monuments are trying to “defame our heroes” and “indoctrinate our children.” He called it a “leftwing cultural revolution.”

“Their goal is not a better America. Their goal is to end America,” Trump said. “In its place they want power for themselves. But just as patriots did in centuries past, the American people will stand in their way and we will win and win quickly and with great dignity.”

“The radical view of American history is a web of lies – all perspective is removed, every virtue is obscured, every motive is twisted, every fact is distorted, and every flaw is magnified until the history is purged and the record is disfigured beyond all recognition,” Trump added.

The order mandates the creation of a task force to establish the garden, open for public by no later than July 4, 2026.

The list of statues features “historically significant” Americans, like former presidents, Founding Fathers, frontiersmen, people who contributed to the discovery of America and African-American abolitionists. There are, however, no Native American, Hispanics or even any Democratic presidents – only Republican presidents are on the list.

The order similarly criticized the destruction of monuments, calling it “an assault on our collective national memory.”

“In the face of such acts of destruction, it is our responsibility as Americans to stand strong against this violence, and to peacefully transmit our great national story to future generations through newly commissioned monuments to American heroes,” the executive order says.