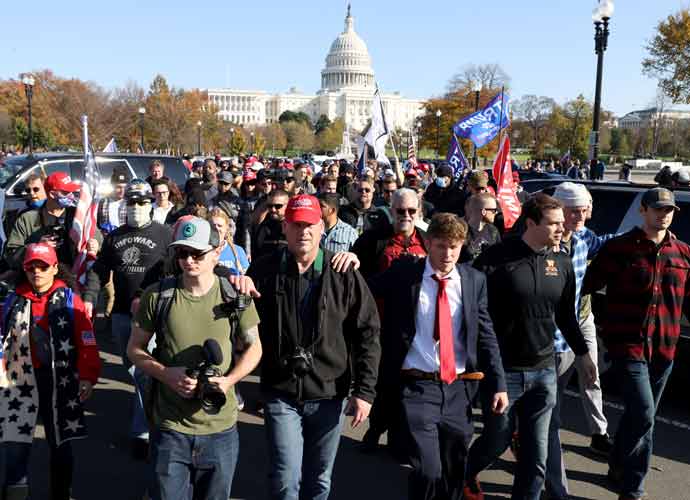 WASHINGTON, DC - NOVEMBER 14: People participate in the “Million MAGA March” from Freedom Plaza to the Supreme Court, on November 14, 2020 in Washington, DC. Supporters of U.S. President Donald Trump marching to protest the outcome of the 2020 presidential election

Although President Donald Trump’s chances at earning a second term are dwindling, especially after he was handed a series of legal defeats from key swing states on Friday, his supporters have yet to relent. On Saturday morning, thousands of maskless pro-Trump citizens swarmed the streets of Washington. D.C., for the “Million MAGA March.” Groups gathered at Freedom Plaza at noon local time to listen to speeches before marching over to the Supreme Court.

As the afternoon wore on, tensions rose as pro-Trump participants were met by roughly 300 counter-protestors who carried Black Lives Matter and Antifa signs. “No Trump, no KKK, no fascist USA,”one counter-protester with a bullhorn chanted.

There were brief but intense clashes between the groups, with people spewing profanity, shouting threats, throwing punches and launching bottles. Police officers had to forcefully separate multiple altercations and eventually formed lines to separate the two groups.

But protesters were not the only members in attendance. As he headed off to his golf club in Sterling, Virginia, Trump and his motorcade drove through the Freedom Plaza to help energize his supporters.