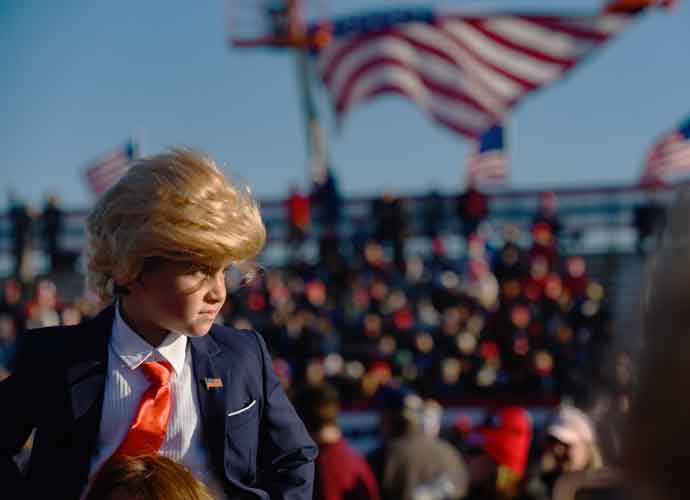 President Donald Trump made a series of false claims about the coronavirus pandemic and his Democratic opponent Joe Biden during his campaign rally in Florida on Monday.

“Sleepy Joe wants to quadruple your taxes. You know? Wants to quadruple. How about where he gets caught again?” Trump falsely stated. “He said, ‘Oh, no, we are not going to give a tax increase, but we are going to terminate all of the Trump tax cuts.’ Well, that’s $2,000, plus child tax credits, plus all of the other things.”

Under Biden’s proposed tax plan, no taxes would be raised on individuals earning less than $400,000. He plans to boost the child tax credit increase to $3,000 per child for children ages 6-17 and $3,600 for children under 6, as well as reverse the Trump era tax cut which lowered the tax rate on the wealthiest bracket by 2.6%.

Trump also implied during the rally that Biden was anti-police.

The moderator who “saved” Biden was rejecting Trump’s overstepping of the debate rules, including his constant interjection. Biden has previously stated multiple times he does not support defunding the police and responded to Trump during the debate saying, “Everybody’s in favor of law and order. I’m in favor of law and order with justice, where people get treated fairly.”

In an op-ed published by USA Today in June, Biden wrote: “While I do not believe federal dollars should go to police departments violating people’s rights or turning to violence as the first resort, I do not support defunding police.”

During the rally, Trump also addressed the COVID-19 pandemic, arguing that the World Health Organization “came out a little while ago” and “admitted that Donald Trump was right” and “the lockdowns are doing tremendous damage to these Democrat-run states.”

The president likely took comments made by Dr. David Nabarro, a special envoy to the WHO, out of context. In an interview with The Spectator last week, Nabarro said national lockdowns should be used to “buy you time to reorganize, regroup, rebalance your resources, protect your health workers who are exhausted,” and not as the primary means of eradicating the virus.

Nabarro suggested countries “build up herd immunity” by not imposing strict lockdowns—an approach the US has more or less followed on a national level—but noted that it would require contact tracing and intense monitoring by local officials, which the U.S. has failed to do on a large-scale. Nabarro cited East Asia, Germany and parts of Canada as examples in using that approach.

Trump has remained extremely critical of the WHO throughout the pandemic and began formally withdrawing from the organization in July.