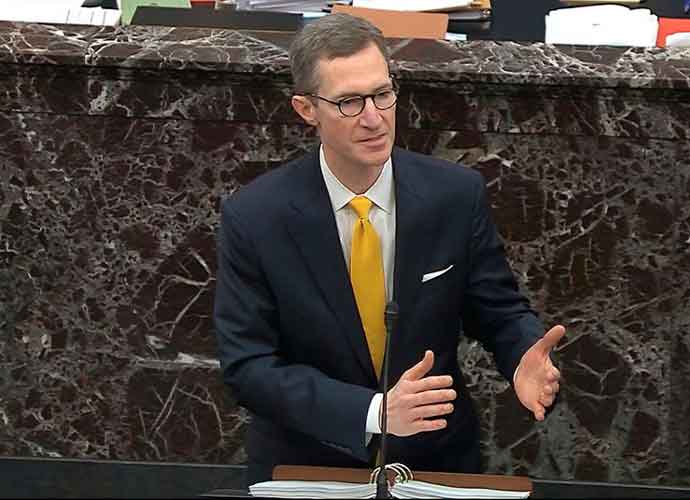 President Donald Trump‘s defense counsel Patrick Philbin claimed in the Q&A segment of the Senate trial Wednesday that accepting or obtaining mere information about political rivals from foreign entities is both legal and not corrupt provided that the information is credible.

Sen. Chris Coons (D-Delaware) had asked whether the President agreed that enlisting foreign countries to interfere with the 2020 election is illegal. Coons had been referring to an ABC News interview, which had aired in June of 2019, in which the President had said, “there’s nothing wrong with listening,” to  a question regarding the legality and morality of enlisting a foreign country to provide political help in the 2020 election. “It’s not interference, it’s information,” Trump stated.

“The idea that any information that happens to come from overseas is necessarily campaign interference is a mistake,” Philbin added. “If it’s credible, information is relevant information for the voters to know about for people to be able to decide on who is the best candidate for an office.”

Does President Trump agree with your statement that foreigners’ involvement in American elections is illegal?#SenateQuestions pic.twitter.com/cqgSqUSqA9

Sen. Debbie Stabenow (D., Mich.) said people around her were dumbfounded, turning to their neighbors to confirm that they’d heard Mr. Philbin correctly. “They said, ‘Did you hear that? Did I hear that right?’”https://t.co/KDOw4Z8sUu via @WSJ

While GOP leadership had a different take on the matter.

Lindsey Graham said Philbin was “absolutely correct” when he argued that asking a foreign leader for information on a political opponent wouldn’t violate campaign finance law.

Lead House Manager and Intelligence Committee Chairman Adam Schiff (D-California) responded to the matter, stating, “[ that means] everything’s ok as long as the president believes it’s in his re-election interest. We’ve witnessed over the course of the last few days and the long day today a remarkable lowering of the bar to the point now where everything’s ok.”