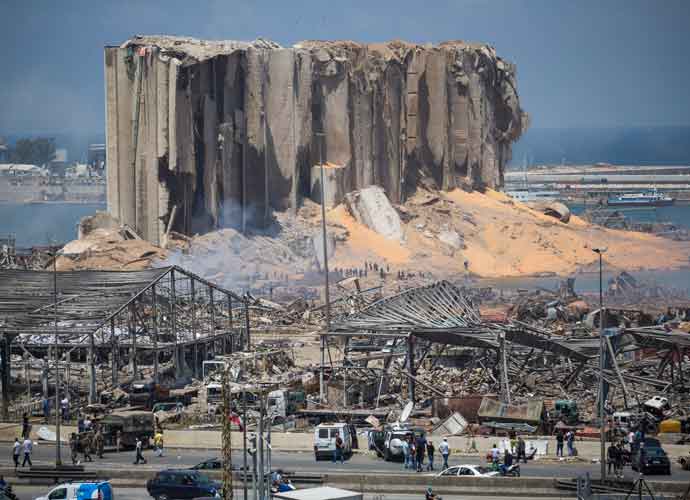 BEIRUT, LEBANON - AUGUST 5: Destroyed buildings are visible a day after a massive explosion occurred at the port on Aug. 5, 2020 in Beirut, Lebanon. As of Wednesday morning, more than 100 people were confirmed dead, with thousands injured, when an explosion rocked the Lebanese capital. Officials said a waterfront warehouse storing explosive materials, reportedly 2,700 tons of ammonium nitrate, was the cause of the blast.

The explosion in Beirut, Lebanon killed at least 100 people and injured more than 4,000, according to George Kettaneh, an official with the Lebanese Red Cross.

The exact cause of the explosion is still under investigation, but despite this President Donald Trump implied it was from an “attack.”

In offering his condolences to the grieving country, Trump said he and U.S. military officials “seem to feel” the explosion was a “terrible attack,” likely caused by a bomb.

When pressed about why he referred to it as an attack instead of an accident, particularly since Lebanese officials have not yet determined the cause of the explosion, Trump replied, “it would seem like it based on the explosion.”

“I met with some of our great generals and they just seem to feel that it was,” Trump told reporters. “This was not some kind of a manufacturing explosion type of an event…. They seem to think it was an attack. It was a bomb of some kind, yes.”

The blast in Beirut appears to have been triggered by a fire that broke out at their port. Prominent Lebanese leaders have suggested that the fire caused a neighboring warehouse containing explosive material to detonate.

Lebanese Prime Minister Hassan Diab tweeted that it was “unacceptable that a shipment of ammonium nitrate estimated at 2750 tons has been present for six years in a warehouse without taking preventive measures that endanger the safety of citizens.”

Ammonium nitrate is an ingredient in fertilizer and is sometimes used in the making of bombs. Some witnesses reported seeing an orange cloud after the initial explosion, which appears when toxic nitrogen dioxide gas is released.

The explosion came amid ongoing tensions between Israel and Hezbollah at Lebanon’s southern border, but an Israeli official confirmed the country “had nothing to do” with the blast.