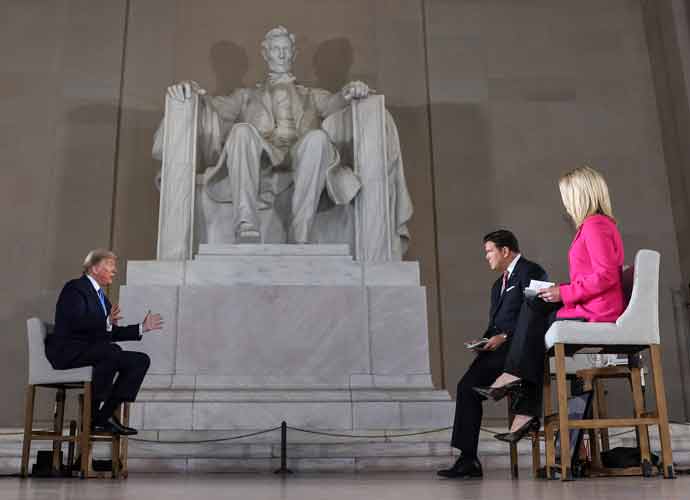 WASHINGTON, DC - MAY 03: President Donald Trump speaks with news anchors Bret Baier and Martha MacCallum during a Virtual Town Hall inside of the Lincoln Memorial on May 3, 2020 in Washington, DC.

David Bernhardt, the U.S. secretary of the interior, made a special exemption to federal regulations to allow President Donald Trump to hold a Fox News virtual town hall at the Lincoln Memorial in Washington D.C. Sunday night. Federal law typically prohibits congregations inside the iconic landmark, but because of the “extraordinary crisis” of the coronavirus, Bernhardt issued a directive Friday that enabled the president and two Fox News anchors Bret Baier and Martha MacCallum to conduct the interview at the memorial.

“Given the extraordinary crisis that the American people have endured, and the need for the president to exercise a core governmental function to address the nation about an ongoing public-health crisis,” Bernhardt wrote. “I am exercising my authority to facilitate the opportunity for the president to conduct this address within the Lincoln Memorial.”

A White House official told the New York Times that interviewing inside the memorial had been a “joint decision” –– though three people involved in the planning of the interview said that the White House had made the decision.

The choice of venue enraged many of Trump’s critics but pleased the administration after a series of negative media reports in recent weeks.

During the interview, Baier pressed Trump about swipes taken at him for hosting the virtual town hall on such “hallowed” grounds. “Your choice, even, of this hallowed place for this virtual town hall is creating controversy, criticism. What do you say to people who say this is not the right venue for this?”

Trump also compared himself to the 16th U.S. President, Abraham Lincoln, for whom the monument was constructed. Lincoln was assassinated after he emancipated slaves during the Civil War.

“Look, I am greeted with a hostile press the likes of which no president has ever seen. The closest would be that gentleman right up there. They always said Lincoln — nobody got treated worse than Lincoln. I believe I am treated worse. You’re there. You see those press conferences,” Trump said.