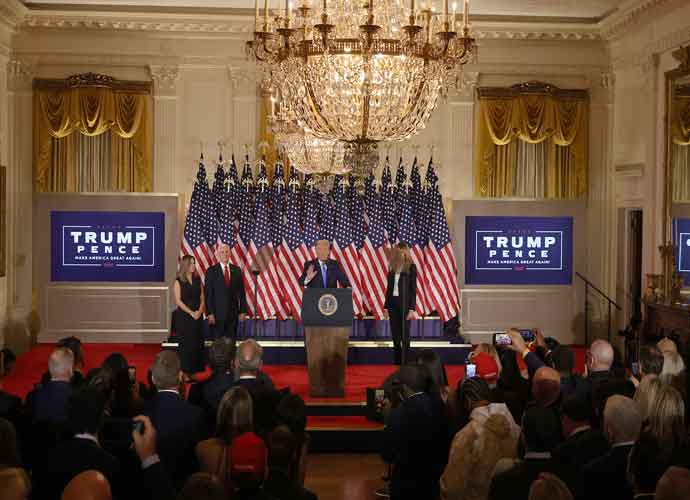 WASHINGTON, DC - NOVEMBER 04: U.S. President Donald Trump speaks on election night in the East Room of the White House as First Lady Melania Trump, Vice President Mike Pence and Karen Pence look on in the early morning hours of November 04, 2020 in Washington, DC. Trump spoke shortly after 2am with the presidential race against Democratic presidential nominee Joe Biden still too close to call.

At 2 a.m. on Wednesday, President Donald Trump falsely declared to his supporters that “frankly, we did this win election,” despite results showing him behind in the electoral college and no official election result being declared by any news organization.

In his speech at the White House, he told viewers that votes needed to stop being counted at this point in the election, even though millions of American ballots still need to be counted.

“We’ll being going to the U.S. Supreme Court,” Trump proclaimed. “We want all voting to stop.” Election results are taking an especially long time this year because Republican officials in many swing states refused to allow votes to be counted until Election Day.

The president seemed to be scrambling for reasons to stop the vote count, claiming that if the Democrats were to “find any more ballots at 4 in the morning,” it should be considered voting fraud.

The president and his Democratic opponent, Joe Biden, have been locked in a tight battle in a number of swing states.

“As I’ve said all along, it’s not my place or Donald Trump’s place to declare who’s won this election,” Biden said earlier in the evening. “That’s the decision of the American people. But I’m optimistic about this outcome.”

Biden saw a surprising win in the battleground state Arizona, which was a Republican state that supported Trump in the 2016 election.

TV networks of also called the key state of Wisconsin for Biden.