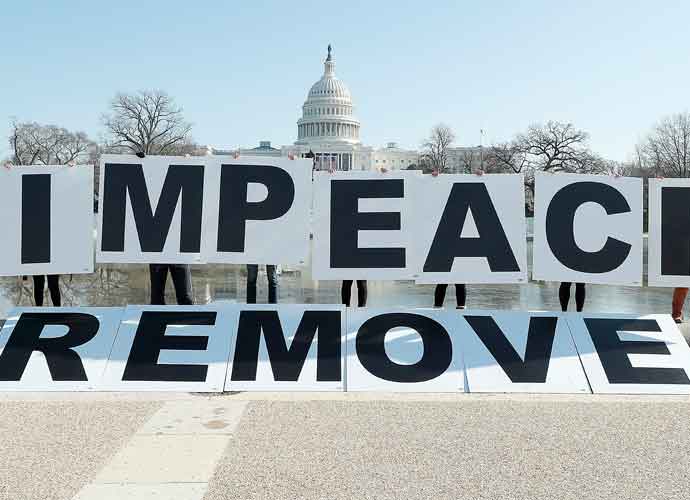 WASHINGTON, DC - JANUARY 12: People gather at the base of the U.S. Capitol with large IMPEACH and REMOVE letters on January 12, 2021 in Washington, DC. The group is calling on Congress to impeach and remove President Donald Trump on the day that Democrats introduced articles of impeachment in response to Trump's incitement of a mob entering the U.S. Capitol Building on January 6. (Photo by Paul Morigi/Getty Images for MoveOn)

On Tuesday, President Donald Trump defended the remarks he made last week that helped provoke a mob of his supporters to violently storm the U.S. Capitol. These remarks came hours before the House was preparing to vote on a resolution calling on Vice President Mike Pence to invoke the 25th Amendment to remove Trump from office due to incapacity.

Pence is unlikely to remove Trump from office, stating he is waiting to run our the clock, so he can make it to January 20 “in one piece.”

When asked if he held any “personal responsibility” over the riot at the Capitol, Trump replied, “If you read my speech, and many people have done it and I’ve seen it both in the papers and in the media, on television, it’s been analyzed and people thought that what I said was totally appropriate.”

“Everybody to a ‘T’ thought it was totally appropriate,” Trump said.

Trump’s comments came six days after the Capitol riots and just one day before the House was set to impeach him for the second time.

Wednesday’s Capitol attack started after Trump spoke to a crowd of his supporters, encouraging them to march to the building and saying, “You’ll never take back our country with weakness. You have to show strength and you have to be strong.”

Hour later, Trump finally responded to the attacks, sending out a pair of tweets calling for peaceful protest while repeating his false claims about the election being stolen and telling the rioters he “loved” them.

Trump’s role in the riots resulted in his accounts being suspended or banned from a number of social media platforms for using them to incite his supporters.

The House is expected to vote on the 25th Amendment measure around 10:30 p.m. EST, according to a schedule released by House Majority Leader Steny Hoyer, (D-Maryland).

The measure states that Pence should “convene and mobilize” Trump’s Cabinet to activate the 25th Amendment to declare the president “incapable of executing the duties of his office and to immediately exercise powers as acting President.”

If Pence ignores the request of the House, the House leadership plans to vote Wednesday on an article of impeachment that would charge Trump with “incitement of insurrection” in urging his supporters to march to the Capitol. The Senate would then hold a trial to decide whether or not to convict Trump and potentially eliminate him from being able to run for office again in the future.