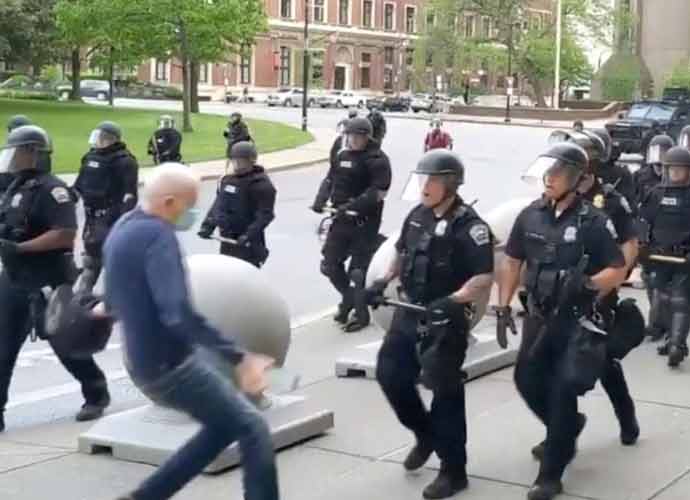 President Donald Trump tweeted a new conspiracy theory Tuesday that a 75-year-old man, Martin Gugino, who was forcefully knocked down by a police officer during Buffalo protests and was rushed to hospital with a head injury, could be an “ANTIFA provocateur.”

In his tweet, Trump speculated the incident in Buffalo, when a police officer shoved Gugino on the ground, was a “set up” and claimed Gugino “fell harder than was pushed.”

Buffalo protester shoved by Police could be an ANTIFA provocateur. 75 year old Martin Gugino was pushed away after appearing to scan police communications in order to black out the equipment. @OANN I watched, he fell harder than was pushed. Was aiming scanner. Could be a set up?

Trump’s tweet was inspired by the right-wing media One America News Network’s recent coverage of the incident. The channel previously had a history of conspiracy-theory reporting. In May, for example, OANN produced a video segment, a coronavirus conspiracy narrative, that was titled “Deep State, China use COVID-19 for population control: Soros, Clintons, Gates suspected of Beijing-WHO cover-up to seize COVID-19 cure, undo U.S. Constitution.”

Here's the first half of the batshit OANN segment Trump just tweeted. It alleges the 75 year old man assaulted by Buffalo police officers was an antifa operative, based on a report from Conservative Treehouse. pic.twitter.com/CeMVyJcoh8

The video of the assault, posted by a local newsroom WBFO, went viral on social media. The incident was widely condemned by state officials. Aaron Torgalski and Robert McCabe, officers who pushed Gugino were then charged with second-degree assault, though they pleaded not guilty.  They were released on bail last weekend. The police station initially claimed Gugino “tripped and fell.” Gugino is still recovering at the hospital.

“Martin has always been a peaceful protester because he cares about today’s society,” Gugino’s attorney Kelly Zarcone told Voice of America. “He is also a typical Western New Yorker who loves his family. No one from law enforcement has suggested otherwise.”

New York Gov. Andrew Cuomo (D) criticized Trump over his tweet at a news conference. “There’s no fact to any of it. He should apologize for that tweet. How reckless, how mean, how cruel,” he said.