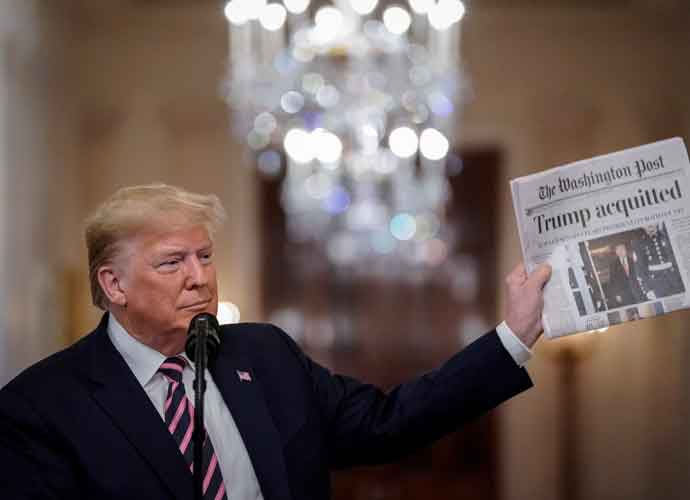 WASHINGTON, DC - FEBRUARY 06: U.S. President Donald Trump holds a copy of The Washington Post as he speaks in the East Room of the White House one day after the U.S. Senate acquitted on two articles of impeachment, ion February 6, 2020 in Washington, DC. After five months of congressional hearings and investigations about President Trumps dealings with Ukraine, the U.S. Senate formally acquitted the president on Wednesday of charges that he abused his power and obstructed Congress.

President Donald Trump gloated over his Senate acquitted on both articles of impeachment that the Democratic House brought against him, in an aggressive speech delivered to a crowded room of supporters.

Trump took time to take punches at his perceived enemies while delivering a speech in the East Room of the White House.

“This is really not a news conference, it’s not a speech. It’s not anything, it’s just — we are sort of — it’s a celebration,” Trump alerted the riveted audience.

During his speech, a newly liberated Trump let loose. He took swipes at everyone from House Speaker Nancy Pelosi to Reps. Adam Schiff (D-California) and Jerry Nadler (D-New York), calling them “very sick and evil people.”

He attacked former FBI director James Comey, who he sacked in his first year in office, stating had he had not fired him, “it’s possible I wouldn’t even be standing here right now.”

“It was all bulls—. We then went through the Mueller report,” Trump continued, referring to Special Counsel Robert Mueller‘s two-year probe. “If they find I happened to walk across the street and maybe go against the light or something, ‘Let’s impeach him!’ So I’ll probably have to do it again, because these people have gone stone cold crazy.”

He also negated the religious argument that Pelosi and Romney shielded themselves behind, stating it was a crutch, an excuse to do whatever they wanted with no guilt or inhibition.

Trump made a joke to First Lady Melania Trump, “Honey, maybe we’ll frame it… The only good headline I’ve ever had on The Washington Post.”

In reference to the Democrats, Trump wrapped up the speech saying, “I’m sure they’ll try and cook up other things that go through the state of New York, other places,” he responded. “They’ll do whatever they can. Instead of wanting to heal our country and fix our country, all they want to do, in my opinion, it’s almost like they want to destroy our country.”