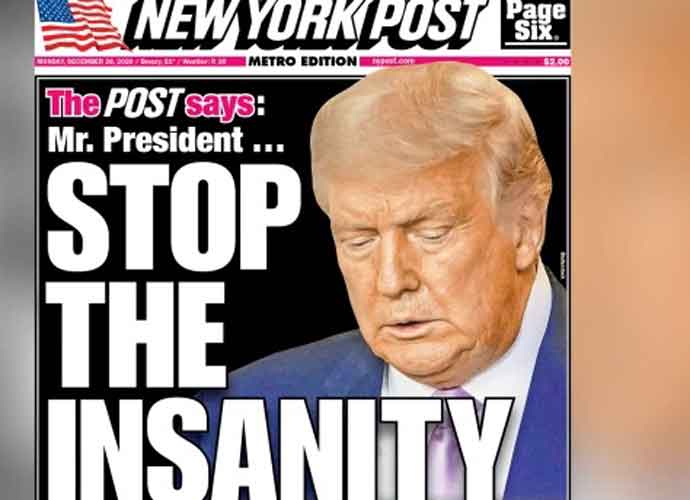 As the end of Donald Trump’s tenure as United States president is approaching, there are still a few important dates left, which will impact the next four years of the country.

On Jan. 5, two runoff races in the state of Georgia will determine if the Democrats or Republicans will control the U.S. Senate. The next day, Jan. 6, is when Congress will certify the Electoral College vote, meaning the winner of this year’s presidential election will finally be official.

With these dates in mind, Rupert Murdoch‘s The New York Post wrote a blunt editorial in which he urged Trump to stop trying to overturn the results of the 2020 presidential election.

The editorial reads, “You have tweeted that, as long as Republicans have “courage,” they can overturn the results and give you four more years in office. In other words, you’re cheering for an undemocratic coup.”

The Post continues to explain how even though Trump had the right to investigate the election, his efforts found nothing, and he should put his anger aside by looking into the future. The editorial notes that the newspaper endorsed and supported Trump and urges him to stop thinking about Jan. 6, and to start thinking about Jan. 5 – the runoff races in Georgia.

“We offer this as a newspaper that endorsed you, that supported you: If you want to cement your influence, even set the stage for a future return, you must channel your fury into something more productive.”

After explaining the importance of the runoff races in Georgia, The Post concludes by telling Trump what he should be focusing on.

“Securing the Senate means securing your legacy. You should use your considerable charm and influence to support the Georgia candidates, mobilizing your voters for them. Focus on their success, not your own grievances, as we head into the final week.”