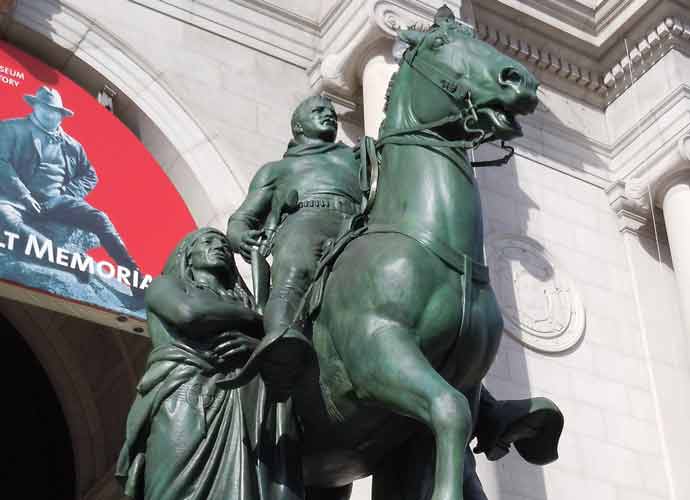 A statue of former President Theodore Roosevelt at the Central Park West entrance outside the American Museum of Natural History in New York is being taken down, amid nationwide calls to remove statues glorifying racism or racists.

The statue of Roosevelt on a horse shows stereotypical depictions of Indigenous people walking on foot beside him.

“The statue has long been controversial because of the hierarchical composition that places one figure on horseback and the others walking alongside,” the museum said in a statement. “Many of us find its depictions of the Native American and African figures and their placement in the monument racist.”

Theodore Roosevelt IV, a great-grandson of the former president and museum trustee, told The New York Times he supported the statue’s removal.

“The composition of the Equestrian Statue does not reflect Theodore Roosevelt’s legacy,” he told the Times. “It is time to move the statue and move forward.”

He added: “The world does not need statues, relics of another age, that reflect neither the values of the person they intend to honor nor the values of equality and justice.”

The museum is not cutting ties with the Roosevelt family, who have been instrumental in founding and supporting the museum. The building even has a rotunda and hall named for the former president.

“Roosevelt’s father was one of the museum’s founders, and the museum is proud of its historic association with the Roosevelt family,” the museum said.

Statue Of Abolitionist Frederick Douglass Torn Down, Found Near River