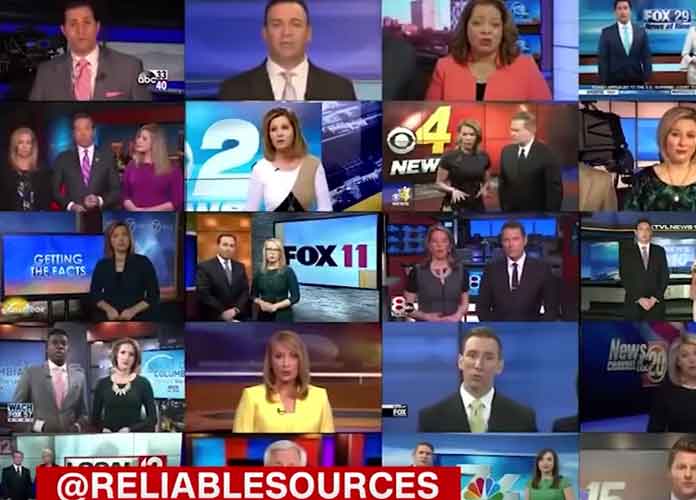 The message — relayed by anchors from affiliates of major telecommunications company Sinclair — related to the proliferation of fake news, and anchors also vowed to report fairly and accurately on major events rather than incorporate any kind of bias. Newscasters even told viewers to go on their station’s website and comment if they think their coverage of anything is not entirely impartial.

Timothy Burke, the director of video at Deadspin, called the ominous warning a “forced read,” after having tracked down the Sinclair affiliates.

Burke created a video edited to show some of the identical lines repeated by the local anchors. Among the lines were:

“The sharing of biased and false news has become all too common on social media.”

“Some members of the media use their platforms to push their own personal bias.”

This is extremely dangerous to our democracy.”

How America’s largest local TV owner turned its news anchors into soldiers in Trump’s war on the media: https://t.co/iLVtKRQycL pic.twitter.com/dMdSGellH3

The message is particularly relevant given the spread of fake news and how it was used to influence the 2016 election of Donald Trump. The president has repeatedly attacked multiple major news networks — including CNN, NBC and the New York Times — and derided them as “fake news” because of their negative coverage of him and his administration.

Sinclair Broadcast Group — the nation’s biggest broadcaster — owns or operates 193 television stations. The company is seeking a $3.9 billion deal to buy Tribune Media. However, the acquisition is still being scrutinized by regulators over antitrust reasons.

In total, 38 legislators have already stated their opposition to the Tribune merger.

Burke’s video — along with a similar one created by liberal news outlet ThinkProgress — rapidly went viral on social media over the weekend, something that caused many to openly lambaste Sinclair.

Trump responded to the criticism of Sinclair in a tweet Monday morning.

“So funny to watch Fake News Networks, among the most dishonest groups of people I have ever dealt with, criticize Sinclair Broadcasting for being biased,” he wrote.

So funny to watch Fake News Networks, among the most dishonest groups of people I have ever dealt with, criticize Sinclair Broadcasting for being biased. Sinclair is far superior to CNN and even more Fake NBC, which is a total joke.

“We aren’t sure of the motivation for the criticism, but find it curious that we would be attacked for asking our news people to remind their audiences that unsubstantiated stories exist on social media, which result in an ill-informed public with potentially dangerous consequences,” Livingston said.

Kirstin Pellizzaro, a doctoral candidate at Arizona State University’s Walter Cronkite School of Journalism and Mass Communication, worked for a Sinclair-owned news station in Kalamazoo, Michigan from 2014 to 2015. She said she did not recall ever being asked to recite a message like this one during her time working for the affiliate.

Sinclair often sends video segments called “must-runs” to its many local affiliates. These videos can include content like terrorism news updates, news commentators speaking favorably of Trump and his administration, or speeches from company executives.