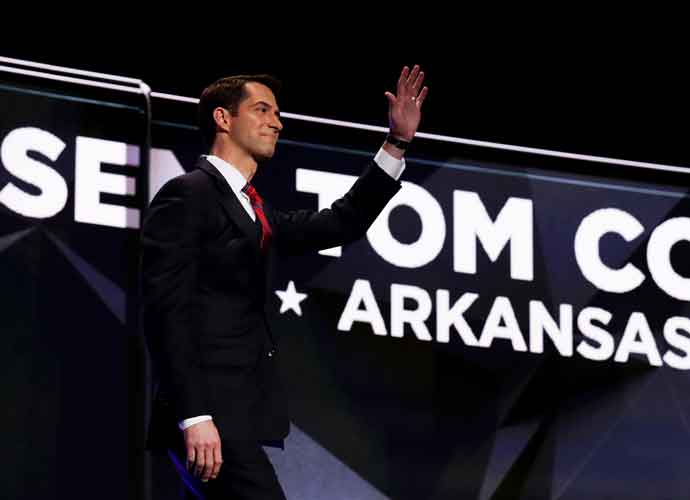 Sen. Tom Cotton (R-Arkansas) said in an interview published Sunday that the U.S. Founding Fathers viewed slavery as “the necessary evil upon which the union was built.”

The comment which came during remarks to the Arkansas Democrat-Gazette about how slavery should be taught in schools, drew harsh criticism – though Cotton later complained “fake news” portrayed his statements incorrectly.

“We have to study the history of slavery and its role and impact on the development of our country because otherwise we can’t understand our country,” Cotton said. “As the Founding Fathers said, it was the necessary evil upon which the union was built.”

He added that the “union was built in a way, as Lincoln said, to put slavery on the course to its ultimate extinction,” and instead of depicting America as “an irredeemably corrupt, rotten and racist country,” the country should be seen “as an imperfect and flawed land, but the greatest and noblest country in the history of mankind.”

Cotton has denounced the 1619 Project for use in schools, which features a series of pieces from New York Times Magazine writers who examine the history of slavery and its role in founding the U.S., calling it “leftwing propaganda.”

“Even a penny is too much to go to the 1619 Project in our public schools,” Cotton told the Gazette. “The New York Times should not be teaching American history to our kids.”

He added that if “local, left-wing school boards want to fill their children’s heads with anti-American rot, that’s their regrettable choice. But they ought not to benefit from federal tax dollars to teach America’s children to hate America.”

Cotton has instead brought forward the Saving American History Act of 2020, a bill that would eliminate federal professional development funds from any school district that teaches a curriculum including or linked to the 1619 Project.

The director of the project, Pultizer Prize-winning journalist, Nikole Hannah-Jones blasted Cotton’s comments about the necessity of slavery, saying “it was legal to rape, torture and sell human beings for profit.” She added that it is “hard to imagine what cannot be justified if it is a means to an end.”

Cotton clarified in a tweet that his comments were not “justifying or endorsing slavery,” since he was  “describing the views of the Founders.”

He added in a second tweet that articles portraying him as believing slavery was a necessary evil are “fake news.”

This is the definition of fake news.

I said that *the Founders viewed slavery as a necessary evil* and described how they put the evil institution on the path to extinction, a point frequently made by Lincoln. https://t.co/SaWTTlMO7w

“I said that *the Founders viewed slavery as a necessary evil* and described how they put the evil institution on the path to extinction, a point frequently made by Lincoln,” Cotton tweeted.