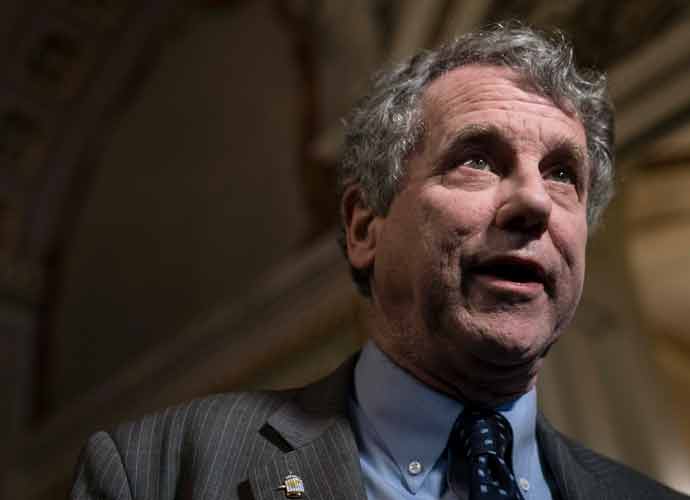 WASHINGTON, DC - JANUARY 30: Senator Sherrod Brown (D-OH) speaks to the press in the U.S. Capitol during a break on the second day that Senators have the opportunity to ask questions during impeachment proceedings against U.S. President Donald Trump on January 30, 2020 in Washington, DC.

Once again, I asked my Republican colleagues to stop endangering all the Senate workers – and simply wear a mask when presiding over the Senate.

Once again, they refused. pic.twitter.com/lykJO8MWmI

When Brown was given the Senate floor, he immediately requested that Sullivan, who was presiding over the chamber, wear a mask.

“I’d start by asking the presiding officer to please wear a mask, as he speaks and people below him or, I can’t tell you what to do but I know that,” Brown said.

Sullivan said, “I don’t wear a mask when I’m speaking like most senators. I don’t need your instruction.”

“I know you don’t need my instruction, but there clearly isn’t much interest in this body in public health,” Brown said as he criticized Republicans for downplaying the virus, pointing the finger to President Donald Trump and Senate Majority Leader Mitch McConnell (R-Kentucky).

“We have a president who hasn’t shown up at the coronavirus task force meeting in months. We have a majority leader that calls us back here to vote on an unqualified nominee,” Brown continued.

Five senators, all who are Republican, have tested positive for the coronavirus since the beginning of the pandemic. Two of them, Sens. Mike Lee  (R-Utah) and Sen. Thom Tillis (R-North Carolina), tested positive after attending Supreme Court Justice Amy Coney Barrett‘s September nomination event at the White House, where face mask-wearing and social distancing were disregarded.