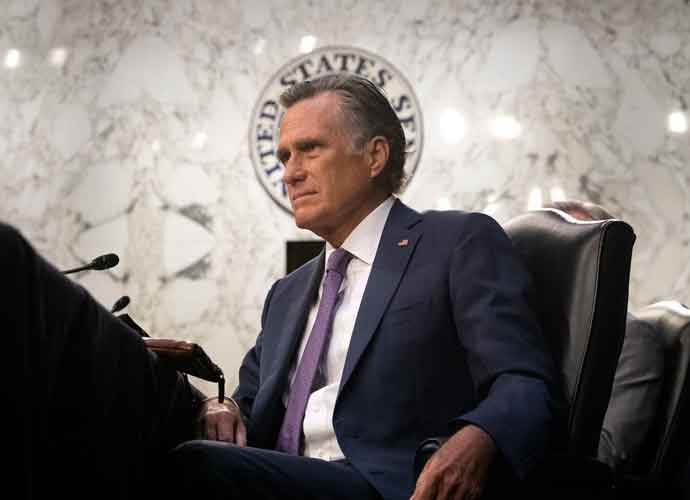 WASHINGTON, DC - FEBRUARY 25: Sen. Mitt Romney (R-UT) attends the confirmation hearing for Vivek Murthy and Rachel Levine before the Senate Health, Education, Labor, and Pensions committee February 25, 2021 on Capitol Hill in Washington D.C. Murthy is nominated to be Medical Director in the Regular Corps of the Public Health Service ands U.S. Surgeon General and Levine is nominated to be Assistant Secretary in the Department of Health and Human Services. (Photo by Caroline Brehman-Pool/Getty Images)

Romney noted that progressives are ignoring inflation and “MAGA loyalists” continue to live in complete denial of reality.

“And when a renowned conservative former federal appellate judge testifies that we are already in a war for our democracy and that January 6, 2021, was a genuine constitutional crisis, MAGA loyalists snicker that he speaks slowly and celebrate that most people weren’t watching,” Romney wrote in a new opinion piece published in The Atlantic.

Romney accused Trump of denying the reality of his 2022 election loss.

“A classic example of denial comes from Donald Trump: ‘I won in a landslide,'” he wrote. “Perhaps this is a branch of the same delusion that leads people to feed money into slot machines: Because I really want to win, I believe that I will win.”

As the 2024 elections loom, Romney delivered a warning that Democrats and Republicans alike have not done enough to prevent another Trump presidency.

He said Biden us well-meaning but unable to get a proper grip on the country.

“President Joe Biden is a genuinely good man, but he has yet been unable to break through our national malady of denial, deceit, and distrust,” the senator said. “A return of Donald Trump would feed the sickness, probably rendering it incurable. Congress is particularly disappointing: Our elected officials put a finger in the wind more frequently than they show backbone against it. Too often, Washington demonstrates the maxim that for evil to thrive only requires good men to do nothing.”