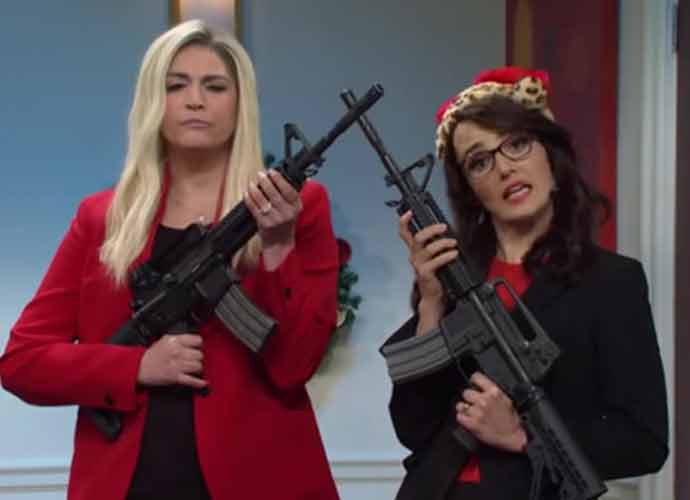 Over the weekend, Saturday Night Live returned from a month-long hiatus and in its cold open, aired a special holiday message from castmember Kate McKinnon‘s parody version of Dr. Anthony Fauci.

“Do people still think I’m sexy or are we done with that?” Fauci quipped, leading into a speech about the omicron coronavirus variant. “With COVID cases on the rise, people still have a lot of questions: ‘Is it safe to travel? Can I still use this as an excuse to get out of stuff? I would like to never work again.’”

Following a few skits that mocked some ridiculous would-be Covid-19 scenarios, Fauci hosted some special guests who had their own words of advice to share with the audience.

That, of course, is untrue, as both men’s careers were ended by scandals involving accusations of sexual assault.

“The government has been using this fake disease to strip us of our freedoms. Do they think we’re dumb?” Greene asked.

“Please, would they give a dumb person a gun? Yes,” replied Boebert.

The final appearance in the cast of insufferable political characters was Sen. Ted Cruz (R-Texas), played by Aidy Bryant.

“That’s right, it’s me, the weirdo with the beardo, Ted Cruz. Hey, if you’re sick of seeing me, imagine how sick I am of being me,” he said, before taking aim at the late Republican Sen. Bob Dole, who passed away from cancer earlier this month.

Watch the full cold open below: