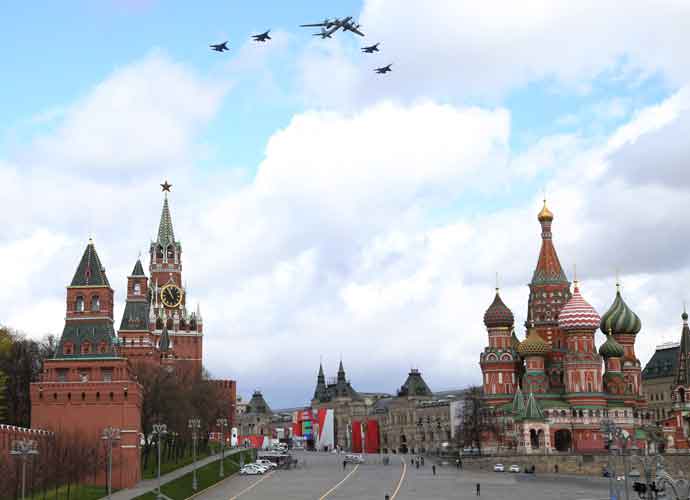 MOSCOW, RUSSIA - MAY 4: A Russian Tupolev TU-95 bomber and jet fighters fly over the Kremlin on May 4, 2022 in Moscow, Russia. Rehearsals are underway as Russia prepares to celebate Victory Day on May 9. (Photo by Contributor/Getty Images)

Messages like “The blood of thousands of Ukrainians and hundreds of their children is on your hands,” “TV and the authorities are lying” and “No to war” flashed across screens of those with smart TVs as Russian President Vladimir Putin was making Victory Day remarks, celebrating the Soviet Union’s defeat of Nazi Germany.

This morning the online Russian TV schedule page was hacked

The name of every programme was changed to "On your hands is the blood of thousands of Ukrainians and their hundreds of murdered children. TV and the authorities are lying. No to war" pic.twitter.com/P2uCNz8cqa

The hack affected major Russian networks such as Russia-1, Channel One and NTV-Plus.

In his speech, Putin drew parallels between the Soviet Union’s fight against Nazi Germany to Russia’s current invasion to “de-Nazify” Ukraine.

The identity of the hacker is unknown.