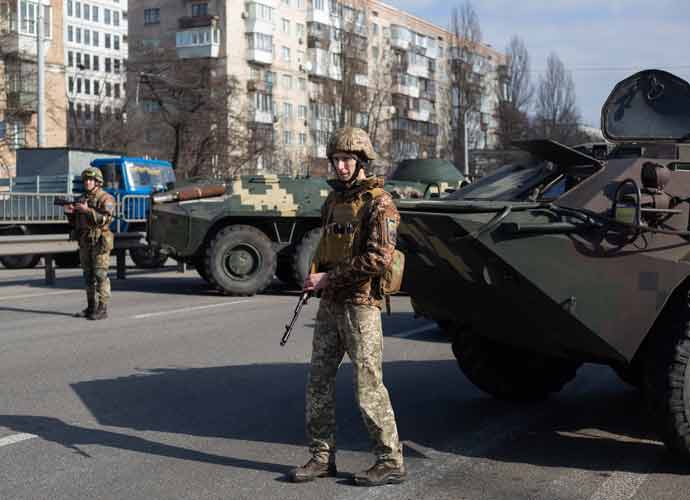 KYIV, UKRAINE - FEBRUARY 25: Ukrainian servicemen stand on patrol at a security checkpoint on February 25, 2022 in Kyiv, Ukraine. Yesterday, Russia began a large-scale attack on Ukraine, with Russian troops invading the country from the north, east and south, accompanied by air strikes and shelling. The Ukrainian president said that at least 137 Ukrainian soldiers were killed by the end of the first day. (Photo by Anastasia Vlasova/Getty Images)

Ukraine’s capital was surrounded by Russian troops by early morning hours on Friday, stoking fears that Russia may have the intent of dismantling democracy and establishing Russian rule in Ukraine.

Reports continue to come in that Kyiv, which is home to three million people, has seen hundreds of casualties already. It remains unclear how much of the city has been seized by Russian forces, and U.S. officials said they did not have a timeline for when Kyiv might fall.

Explosions were heard all over Kyiv as missiles were launched throughout the night. Ukrainian President Volodymyr Zelensky said that he would provide weapons to citizens who were willing to defend Ukraine.

He added that he would take up arms to defend his city. “I don’t have another choice. I have to do that. I would fight,” he said.

Many Kyiv citizens have gotten out of town or are trying to. The roads are packed with cars of people making an effort to leave the city. Others are sheltered down in Kyiv subway stations for protection.

Zelensky announced that over 130 Ukrainians died on the first day of fighting.

The U.S. and their allies put together even stronger punishments directed at Moscow. Zelensky has asked Western leaders to work more quickly to cut off Russia’s economy and send Ukraine more military help.

“If you don’t help us now, if you fail to offer a powerful assistance to Ukraine, tomorrow the war will knock on your door,” warned Zelensky.

“When bombs fall on Kyiv, it happens in Europe, not just in Ukraine,” he added. “When missiles kill our people, they kill all Europeans.”