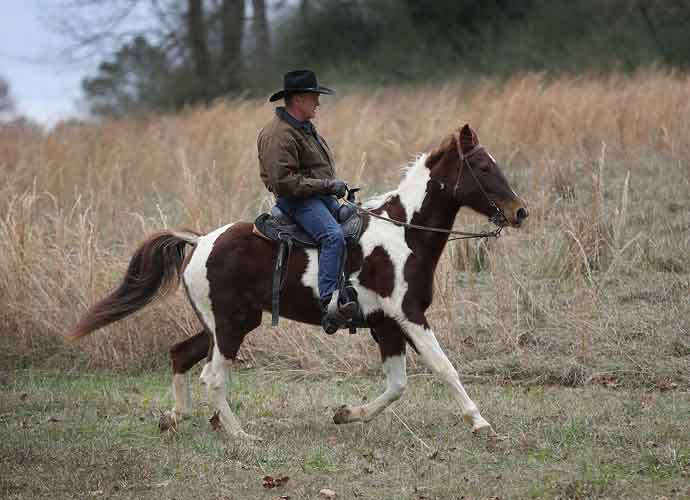 GALLANT, AL - DECEMBER 12: Republican Senatorial candidate Roy Moore rides his horse to cast his vote at the polling location setup in the Fire Department on December 12, 2017 in Gallant, Alabama. Mr. Moore is facing off against Democrat Doug Jones in the special election for the U.S. Senate. (Photo by Joe Raedle/Getty Images)

After being defeated at the polls, Republican Roy Moore still refuses to concede defeat to Democrat Doug Jones in the Alabama Senate race.

Jones narrowly won the seat on Tuesday, but Moore says he will wait for certification from the Secretary of State’s office before he concedes. Some military and provisional ballots are still being counted. Some also speculate the Moore will demand a recount.

Jones is the first Democrat in 25 years to be elected to an Alabama Senate seat. He cannot, however, be seated until Alabama Secretary of State John Merrill certifies the win, which will occur between Dec. 26 and Jan. 3.

In a 5-minute video, Moore addressed his supporters after his loss, and tells them that he will not concede just yet. “We are indeed in a struggle to preserve our republic, our civilization, and our religion, and to set free a suffering humanity. And the battle rages on,” he said. “I believe the heart and soul of our country at stake. Like most Americans, I am concerned about the future of our country, both financially and morally… Today we no longer recognize the universal truth that God is the author of our life, liberty. Abortion, sodomy, and materialism have taken the place of life, liberty, and the pursuit of happiness.”

Moore continues to speak about his own faith and the lack of Christianity in America, despite successes. “We have grown in numbers, wealth, power, but we have forgotten God,” he lamented. “We have stopped prayer in schools; we have murdered over 60 million of our unborn children; we’ve redefined marriage and destroyed the basis of family. we’ve even begun to recognize the right of a man to claim to be a woman, and vice versa… Immorality sweeps over our land.”

Moore has been accused of sexual harassment and assault by nine different women in the past months, and made a short note of it in his speech. “Even our political process has been affected with baseless and false allegations,” he says. Despite the allegations against him, Donald Trump still chose to endorse the Republican candidate.