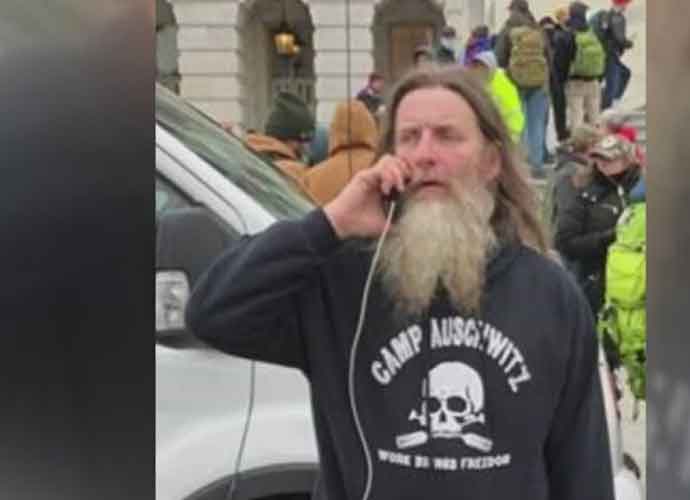 Amid the deadly Capitol Hill riots on Wednesday, a bearded rioter was spotted wearing a black anti-Semitic “Camp Auschwitz” hoodie. On Tuesday, the man seen in the footage, Robert Keith Packer, was arrested by police in Newport News, Virginia.

Among rioters was a man with an anti-Semitic sweatshirt that read “Camp Auschwitz,” a reference to a Nazi extermination camp during the Third Reich’s genocide campaign against Jews during World War II where 1.1 million died.

The sweatshirt, which is emblazoned with the phrase, “work brings freedom,” which were the words on the concentration camp’s gates.

The image spread across social media and news outlets, including in Britain, Germany and Poland.

Jewish groups were quick to react. “A company with a presence in NYC – home to over a million Jews – is selling this t-shirt. Making jokes about the Holocaust is never, EVER going to be funny,” the New York City Jewish Caucus wrote in a Friday morning tweet.

A company with a presence in NYC – home to over a million Jews – is selling this t-shirt.

Making jokes about the Holocaust is never, EVER going to be funny.

Please join us in emailing the company to express your displeasure.

The pullover’s inscription is an English translation of the German phrase “Arbeit Macht Frei,” which hung over the infamous Auschwitz death camp in Nazi-occupied Poland — one of the Holocaust’s most notorious and deadliest concentration camps.

Watch @robertmooreitv‘s report from inside the Capitol building as the extraordinary events unfolded in Washington DChttps://t.co/krCQf1uQbx pic.twitter.com/SiWbzF5Nzs