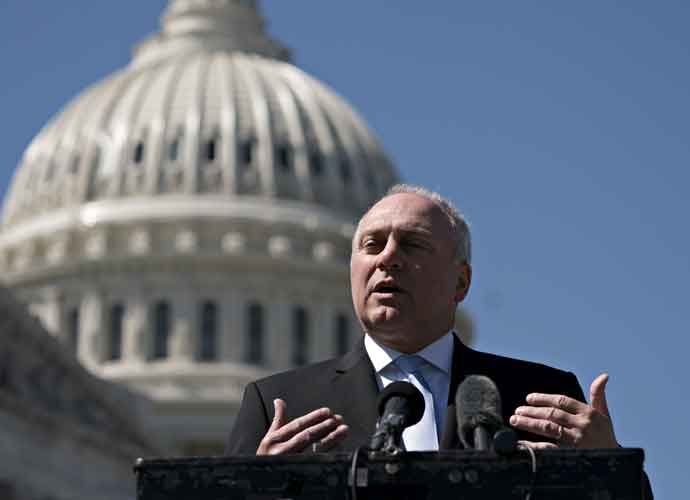 On Sunday, Scalise falsely claimed that Biden was elected because “states didn’t follow their election laws during an interview with ABC’s Jonathan Karl. Karl asked Scalise, “Clear this up for me: Joe Biden won the election; he is the legitimate president of the United States; the election was not stolen. Correct?”

“Look, Joe Biden’s the president,” Scalise responded. “There were a few states that did not follow their state laws.”

Of the 65 court challenges made regarding the 2020 election, no judge ruled that any state conducted their election illegally. The only case to go in favor of Trump and his lawyers was a decision that Pennsylvania’s altered a requirement allowing poll watchers to stand a few feet closer to ballot-counters.

Karl did not push back on Scalise’s lie.

“At the end of the day, when you look at where we are in the country, either we’re going to address the problems that happened with the election that millions of people are still concerned about,” Scalise said.

Karl then redirected the questioning: “Congressman, I know Joe Biden’s the president; he lives at the White House. Is he the legitimate president of the United States and do you concede that this election was not stolen?”

“Once the electors are counted, he is the legitimate president,” said Scalise, “but if you’re gonna ignore the fact that there were states that did not follow their own state legislatively set laws, that is the issue at heart that millions of people are still not happy with … are we finally gonna get back to the way the rule of law works? Those states that didn’t follow the law, are they gonna keep doing that in the future?”

Karl then politely thanked Scalise for his time.

The Scalise interview was unlike a February Newsmax interview where a host walked out on MyPillow CEO Mike Lindell for making similar “election irregularity” claims.

The Department of Justice, the FBI, the Department of Homeland Security, The U.S. Election Assistance Commission have all agreed that there were no voting irregularities by states or at the federal level.