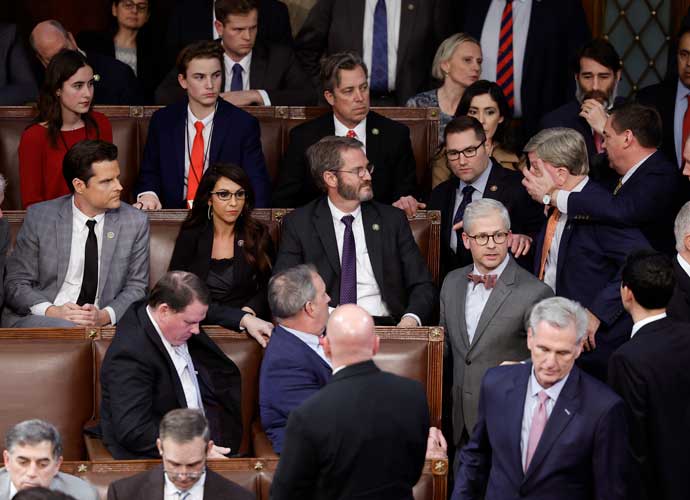 WASHINGTON, DC - JANUARY 06: U.S. Rep.-elect Mike Rogers (R-AL) (C) is restrained by Rep.-elect Richard Hudson (R-NC) (R) after getting into an argument with Rep.-elect Matt Gaetz (R-FL) as House Republican Leader Kevin McCarthy (R-CA) walks away, in the House Chamber during the fourth day of elections for Speaker of the House at the U.S. Capitol Building on January 06, 2023 in Washington, DC. The House of Representatives is meeting to vote for the next Speaker after House Republican Leader Kevin McCarthy (R-CA) failed to earn more than 218 votes on several ballots; the first time in 100 years that the Speaker was not elected on the first ballot. (Photo by Anna Moneymaker/Getty Images)

Rogers raised his voice and pointed at the Florida lawmaker, but he was quickly pulled away by Rep. Richard Hudson (R-North Carolina).

“@RepMattGaetz and I have a long and productive working relationship, that I am sure will continue,” the veteran Alabama lawmaker tweeted on Sunday. “I regret that I briefly lost my temper on the House Floor Friday evening and appreciate Matt’s kind understanding.”

.@RepMattGaetz and I have a long and productive working relationship, that I am sure will continue. I regret that I briefly lost my temper on the House Floor Friday evening and appreciate Matt’s kind understanding. https://t.co/8GmbJHO3cK

Rogers’ outburst came after Rep. Kevin McCarthy‘s (R-California) 14th failed vote for the speakership. McCarthy supporters had swayed many GOP holdouts, leading some to believe that the speaker’s race was finally done.

Gaetz, however, voted “present,” denying McCarthy a majority of the votes – and extending the embarrassing GOP sideshow to find a new speaker.

McCarthy eventually won the speakership in a historic 15th round of voting after several other congressmen agreed to vote present.

Gaetz and Rogers are both on the Armed Services Committee. When asked whether the two lawmakers could work together on Fox, Gaetz said, “we are going to work together wonderfully going forward.”

“He has my forgiveness,” Gaetz later said in a tweet.

Rogers’ anger might have been due to backroom handshake deals between McCarthy and Gaetz. Gaetz may have been offered the gavel on the subcommittee – a role that Rogers believes should have been handed to more qualified candidates.

Without an elected House Speaker, the chamber’s standard rules were not established. The rules typically bar cameras from filming different angles of sessions. Because those rules weren’t set, C-Span captured never-before-seen altercations on the House floor. Some members of the House have called for those cameras to have greater access in the future.

I think C-SPAN should keep control of the cameras on the house floor. It makes our democracy more accessible, understandable, and exciting. Let the people see Democracy in action. #FreeCSPAN