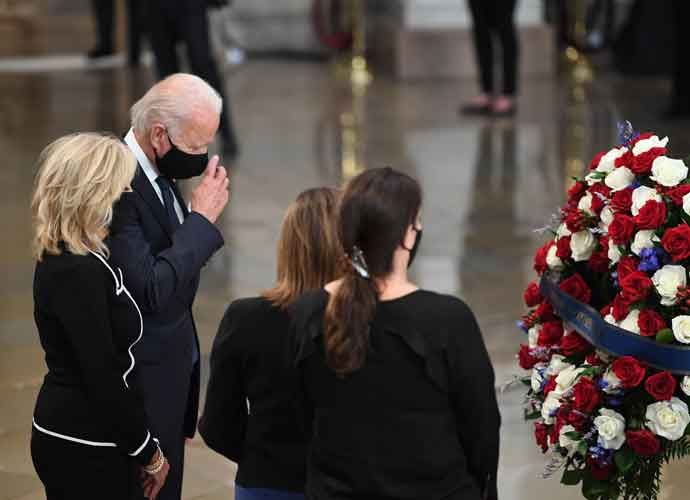 WASHINGTON, DC - JULY 27: Democratic presidential candidate, former Vice President Joe Biden and wife Jill Biden pay their respects at the casket of Rep. John Lewis (D-GA) at Rotunda of the U.S. Capitol for a memorial service on July 27, 2020 in Washington, DC. Lewis, a civil rights icon and fierce advocate of voting rights for African Americans, will lie in state at the Capitol. Lewis died on July 17 at the age of 80.

Due to the Capitol being closed to the public amid the coronavirus pandemic, Lewis will lie in state under the Capitol dome for just a few hours on Monday during an invitation-only ceremony reserved for members of the legislative branch.

Lying in state is reserved for the most distinguished government officials and military officers, while lying in honor may be given to private citizens.

Rep. Elijah Cummings (D-Maryland) made history last year, when he became the first Black lawmaker to lie in state at the U.S. Capitol in Statuary Hall. The Rotunda has been reserved for the nation’s foremost heroes, including most recently Sen. John McCain (R-Arizona) and President George Bush.

Among those paying their respects to Lewis included Vice President Mike Pence and presumptive Democratic nominee Joe Biden. President Donald Trump confirmed he would not be attending, but previously tweeted his condolences.

“God truly blessed America with the life and leadership of John Lewis,” Pelosi said. “Through it all John was a person of greatness. He also was a person of great humility, always giving credit to others in the movement. John committed his life to advancing justice and understood that to build it, a better future, we had to acknowledge the past.”

Pelosi said that Lewis used his past experiences fighting for civil rights, including being one of the original Freedom Riders, to influence the next generation of those fighting injustice.

“John focussed on the future, on how to inspire the next generation to join the fight for justice. In his quote, ‘to find a way to get in the way,'” Pelosi said, adding that he understood how powerful young people can be in a movement. “When asked what someone can do who is 19 or 20 years old, the age he was when he set out to desegregate Nashville, Lewis replied, ‘a young person should be speaking out for what is fair, what is just, what is right. Speak out for those who have been left out and left behind. That is how the movement goes forward.”

McConnell echoed Pelosi’s remarks, saying that “even though the world around him gave him every cause for bitterness, he stubbornly treated everyone with respect and love.”

“John’s friend, Dr. Martin Luther King Jr. famously said the arc of the moral universe is long, but it bends towards justice. But that is never automatic,” McConnell said. “History only bent towards what’s right because people like John paid the price to help bend it. He paid that price at every Nashville lunch counter where his leadership made segregation impossible to ignore. He paid it in every jail cell where he waited out hatred and oppression. He paid that price in harassment and beatings from a bus station in South Carolina to the Edmund Pettus Bridge.”

Lewis was repeatedly beaten and arrested as a Freedom Rider, including being left unconscious once at a Greyhound station in Montogomery. And during the famous march to Selma, Lewis was among the peaceful protesters attacked when crossing the Edmund Pettus bridge.

Vocal artist Wintley Philipps performed “Amazing Grace” and “It is Well with My Soul,” and a clip of Lewis giving a speech was played and met with applause as well.

Lewis’ coffin was moved outside the Capitol steps following the ceremony for a public viewing, which requires attendees to wear masks and social distance. Viewers will be able to visit and see it from the plaza below beginning Monday evening and all day Tuesday.